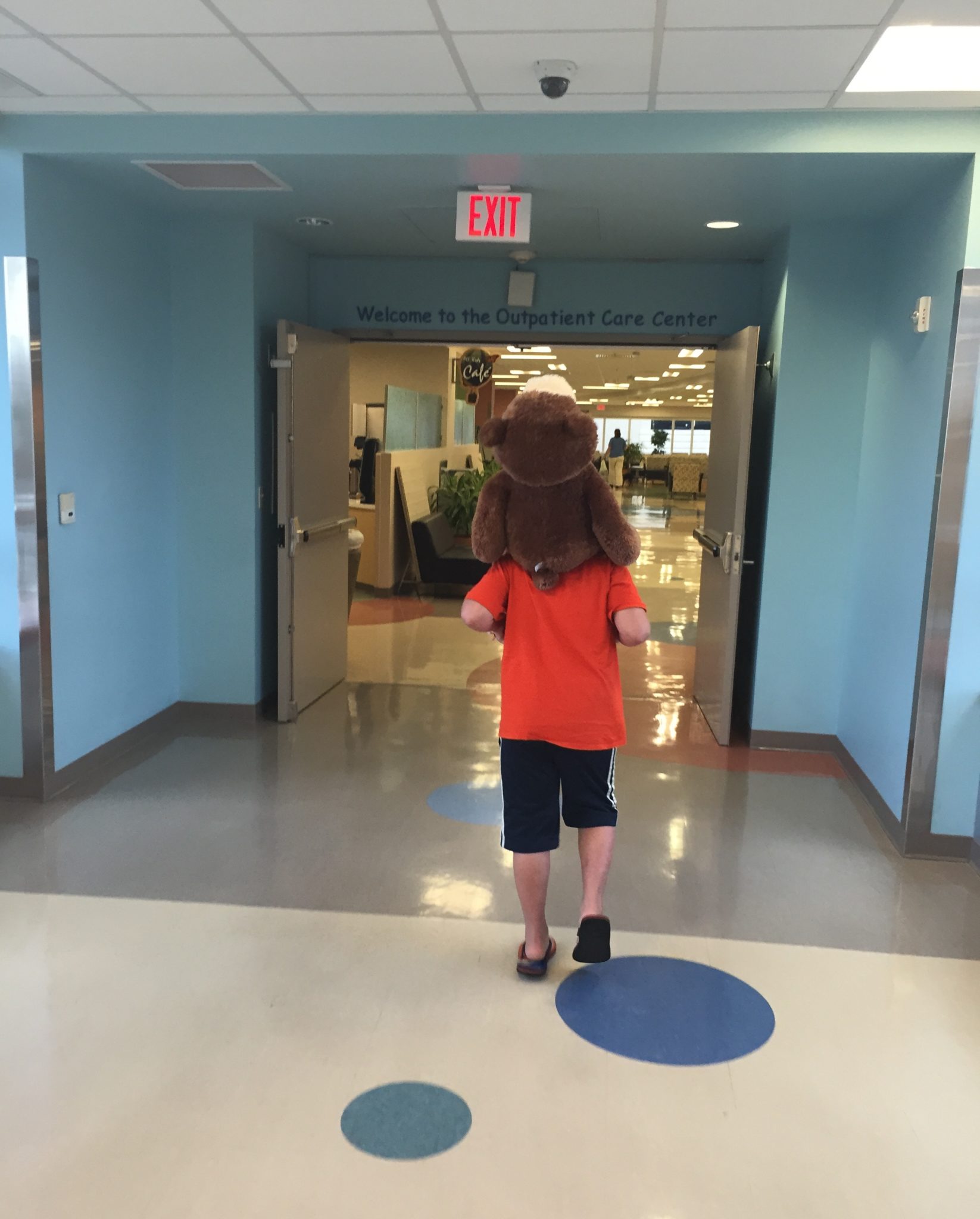 Just after I published last night’s post, our night nurse came in to tell me that Benjamin’s Hour 72 methotrexate levels had come back at 0.12, just a hair too high to clear. We’d have to wait until his noon levels today to learn whether we’d be going home or not. With that news, I settled into a deep sleep.

We woke early for the day. Benjamin was nauseous. We requested Marinol, and it was immediately effective; so effective that we decided to go back to sleep. When we woke up, Benjamin was nauseous again. I realized that his 9am dose of Kytril should have taken place during our morning nap, and asked the nurse if it had been administered. She said it had not. It was another one of those moments–as well-intentioned and skilled as the oncology nurses are, sometimes, mistakes are made. I thought again about the kids who have no advocate, who are up there on the seventh floor alone.

Luckily, the Kytril-Marinol combo was effective in time, and Benji had a vomit free day. We talked about the prospect of this being our last day on the seventh floor. He said, “Mom, it’s not like I won’t get sick in the next three years. That’s just how life goes.” He’s right; even though this is our last planned admission, a fever would bring us back, and reading more about the phase ahead of us (Delayed Intensification), I am well aware that hospitalizations are possible. Still, I would like to give thanks for the team of people who have made the six hospital stays we’ve had so far as pleasant as they could possibly be.

Benjamin’s Hour 84 blood draw happened around noon. He steeled himself, as he is used to doing, for the saline flushes and the extraction of blood. I have seen him hold his nose and cope with these draws so many times; I don’t know why this one made me cry, but it did.

While we waited for the results, we visited the Pet Therapy room, and met Winston Churchill, the Yorkshire Terrier. In the room was another cancer patient with her sister. The patient was a young girl, maybe ten, with a knit cap covering her hairless, gorgeous head. Her skin color was worrisome, and I wanted to cradle her up. We learned that her family has a Whippet (I was reminded of A Prairie Home Companion), and we showed them photos of our dogs. We all left the room together to go back to 7 South. She walked with much difficulty, as though every step caused her pain.

Benjamin cleared his Hour 84 blood draw with a methotrexate level of 0.06. Michael was on the phone when the nurse practitioner came in with the happy news. Benjamin didn’t feel well, so I let him rest, and slowly packed our things. The first time we left after a hospital stay it took five wagons. This time, I was able to load everything deftly onto one.

As I was packing, I got a text message from the mom to whom I was introduced in early June, whose daughter was given the same diagnosis as Benjamin. They were being admitted for an unexpected blood clot in the little girl’s chest. They were waiting for a room on the seventh floor. I could feel the fear in her words. I was packing up our altar, on which there were two angels. I asked Benjamin, “Do you think we should leave one of these angels here for McKinley?” And I held them out to him. Without hesitation, he said, “YES. She should have the nicest one. The blue one.” So we gave it to the nurse.

In that moment, I felt that now-familiar dichotomy of gratitude and guilt. We aren’t dealing with a blood clot, or significant pain, or neuropathy, thank goodness. All things considered, Benjamin is doing so well. His treatment so far has not been without roadblocks, yet his path feels almost easy in the face of these new friends who are having such a harder go of things. I try to shut out the thoughts that question this relative ease. I try to focus only on his strength and my gratitude. But it is hard to keep out the threatening worry. On the way back south over the Skyway, these were the thoughts I grappled with.

When we pulled into our house on Clematis Street, many neighbor children were there, ready to play. Banyan had spent the day next door and came home to greet us. The kids played basketball in the driveway while I unpacked. I was surprised at my lack of energy. I had visualized a homecoming during which I’d clean the house from top to bottom. Instead, I called them in to watch a movie, and I laid down in my bed…my sweet, perfect bed…and slept for a solid hour.

I woke up and took a long shower. My sweet friend who organized the lemonade stand came by to deliver donations for our family. Michael’s mother, sister, aunt and cousin came by to deliver a freshly prepared meal. The neighborhood kids were back in the driveway, hoping for a game of pickup football. Our community was right here waiting for us.