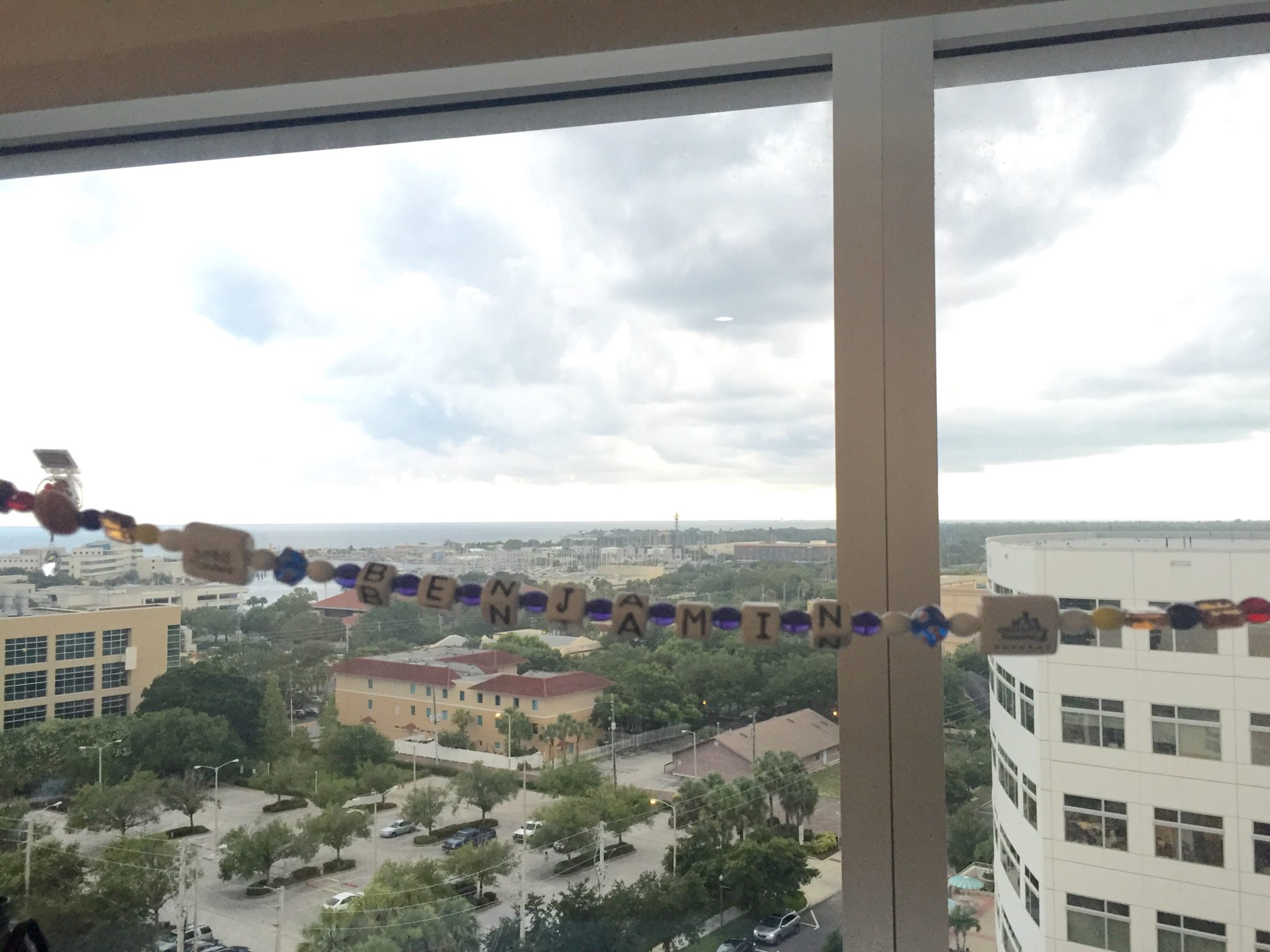 Benjamin and I both stayed awake until his blood draw last night. He asked to read my journal entry to pass the time, but couldn’t get beyond the first sentence. I think “dripping” was the word that made him turn away. Regardless, the boy was beyond brave during the blood draw. He fell asleep shortly after, and I stayed awake to finish a novel and get the results. At 1am, I learned his methotrexate levels were 0.69, well above the 0.4 needed after 48 hours to be cleared for discharge. The next draw would be at noon today, and he’d need to be below 0.1.

As late as it was, I had such a hard time falling asleep. I missed Michael, and I missed my bed. I wrapped myself up in the Remission Scarf and finally drifted.

I was awakened from a deep sleep some hours later. Jackie, my absolute favorite night nurse, was rubbing my arm, telling me she was supposed to give Benji a dose of Lasix because he was exceeding their protocols for input vs. output ratios. Basically, he hadn’t peed enough. I came out of my grogginess and asked her to please wait on the Lasix. I grabbed a urinal and woke him up. He peed aplenty. There. Balanced. I was so thankful to have been woken; one less intervention needed.

Soon after we woke for the day, Benjamin felt nauseous. I requested Marinol, and he vomited as soon as he swallowed the pill. The nurse brought him another tablet, and his dose of IV Kytril. Soon, all was well again. He was excited because our sweet friends and neighbors were coming for a visit, and bringing Banyan with them.

While we waited, I showed Benji that Jackie had updated his Beads of Courage during the night shift. A bead is given for each act of bravery throughout treatment (surgeries, doses of chemo, nights in the hospital, etc.). We strung them together and hung them in the room near our prayer flags. So far, not counting the little cubes that spell BENJAMIN, he has 160 beads.

Benjamin’s “Hour 60” blood draw happened as our friends were parking in the All Children’s garage. He was so brave, again, and it was over just before they walked in. Their visit brightened Benjamin’s day like few things could. In addition to being like sisters, these girls live next door, so it was like they brought  a little bit of Clematis Street over the Skyway. We talked, we played, we ate lunch, and we showed them around 7 South. It was all so wonderfully normal.

Banyan stayed with us after our friends left. They picked out a movie and we had some quiet time before Michael arrived. Dr. Grana came in, and we discussed Benjamin’s discharge, which we hope will happen in the morning.

Michael arrived after work with a huge smile and huge care package from our friends in Atlanta. We explored its super fun contents, grabbed a bite from the cafeteria, and played trivia. I took a long shower. The acoustics in there are superb.

Benjamin’s Hour 72 blood draw happened just before midnight. I’ll find out soon if we can leave in the morning, or if we will wait until noon for another draw. I am still fighting the sadness of missing home, but here, next to Benji, in the quiet, it is morphing into a kind of nostalgia for this place we are about to leave.

I remember Dr. Oshrine saying we’d look back at Benjamin’s treatment with a “strange fondness.” I understand what he means. This may be our last night here for a long time, and despite the conditions which brought us here, it’s become a second home. We know the language. We know how to operate the IV pole and take our own vitals. We know what time of day the rainbow maker spins, and how long to heat the water in the microwave for tea. We know where to find salt and pepper, sugar and straws, tape and scissors, towels and crayons. We know nearly every nurse, clinician, volunteer and custodian on the floor. We have built relationships here. We have built memories here. Strange, fond, proud memories.

Still, we’re ready to be home.