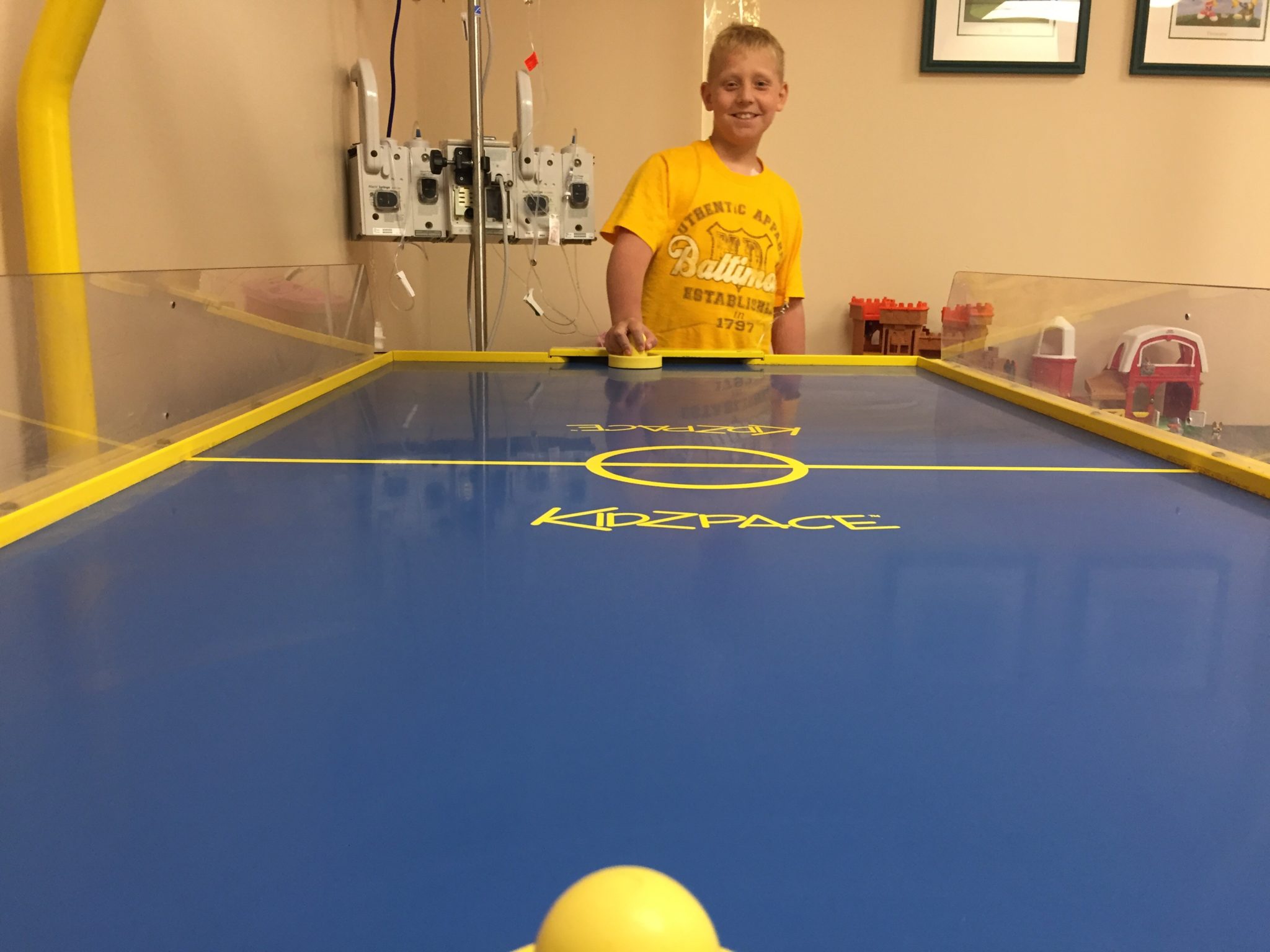 Benjamin threw up again this morning, but I could tell it was purely a result of the saline flush. He drank water on his own through the night and was asking for it to help with the saline taste in his mouth. These were good signs.

The morning’s blood draw showed a methotrexate level of 0.18. So close. I could see Benji had turned a corner, so I threw open the shades and pumped up the energy in the room. I packed as much as I could so we’d be ready to leave upon discharge, should it happen tonight.

Benji watched me pack. He said his back hurt and his tummy burned; I told him his back hurt because he’s been in bed for two days without moving, and his tummy burned because there is nothing in it to absorb the acid. I felt that eating and moving would speed up this last bit of detoxification. I also knew the decisions to eat and move were his to make. Me telling him to do either would only prolong the process.

By 11am, Benji was ready to try some seaweed crackers and an apple with almond butter. It was so nice to see him eating again. When I walked outside of our door for rounds, Benji asked, “What do you guys talk about out there anyway?” I said “You’re always welcome to join us!” So he did.

We went to the play room after rounds and played air hockey. It was so much fun. Benji was beating me when he had to go pee, so we headed back to the room with every intention of resuming our game. However, someone decided to heat up leftover seafood in the communal microwave. On a pediatric oncology ward. Really? Benjamin almost threw up in the hallway.

We stayed in our room for the rest of the day. He was coaxed out just past the doorway when he heard another patient whizzing his RC car down the hall. He quickly got his own and sent it flying as well, in and out of nurses’ feet and crashing into anything he could.

At this point I was super optimistic about the day. I thought Benjamin might eat lunch. No dice. But he did join me on the couch with the view so we could check everything out with our binoculars. We could see the Bayflite helicopter, the Coast Guard ships, the Skyway, biplanes, jets, osprey, people.

Shortly afterward Benji got another terrible headache. I blamed myself. In my excitement about his improving mood, I temporarily forgot that sensitivity to sunlight is one of the most common side effects of methotrexate. Whether this was the cause of the headache, I don’t know, but it was a good reminder. Tylenol and a nap fixed the problem.

Benjamin’s gastrointestinal tract continue to burn all day. It seemed to be relieved by the little bit of food he ate in the morning, but nothing appealed to him after that. I tried to coax him into aloe juice or glutamine, to no avail. When Michael was on his way, he asked if he could bring Benji anything. We talked him into some chocolate gelato, but when it arrived, he only ate one bite. The only thing he wanted was ice water.

As the evening blood draw got closer, Benjamin grew nervous. The imminence of the saline flush was bringing him to tears. Our nurse suggested a different kind of flush, one that was not a premix, but freshly drawn. I didn’t know we had an option. I did some research; premix flushes contain a benzyl alcohol preservative, hence the distinctive smell.

We have had several nurses through this five-day stay, and many of them know now that the saline flushes are the triggers for Benjamin’s nausea. However today’s nurse is the only one who has made the suggestion, and it worked beautifully. We are thankful for her–Krystyna with two Y’s–and we will know what to ask for from now on.

The results of the evening blood draw surprised us all: 0.18, exactly the same as this morning’s count. This is not cause for alarm. Every child detoxifies at a different rate, and Benjamin’s crazy nausea may have played a part. It was cause for major disappointment by one little boy, whose biggest concerns right now are sleeping in our bed at home, and making it to his brother’s basketball game tomorrow.

We are making the best of it. Michael picked up dinner, and Benjamin actually ate a few bites. His tummy wouldn’t tolerate much. It hurts, and not from nausea. His mouth started hurting tonight too, and I noticed the tell-tale scalloping that signals the beginning of mucositis. I gave him glutamine and he took it easily, along with more mouthwash. We ran him a bath, he said goodbye to his daddy, and now we are in bed watching the original Annie. He fell asleep while Annie was meeting Daddy Warbucks.

I could feel a sadness in Benjamin tonight. He pushed it down, he understands what must be done, but it was there. I’m grateful for his resilience. But we have to do this all again in ten days, and I’m ready to give his body a break. I know I’m not supposed to have expectations, but I have hopes. I want to go home tomorrow.