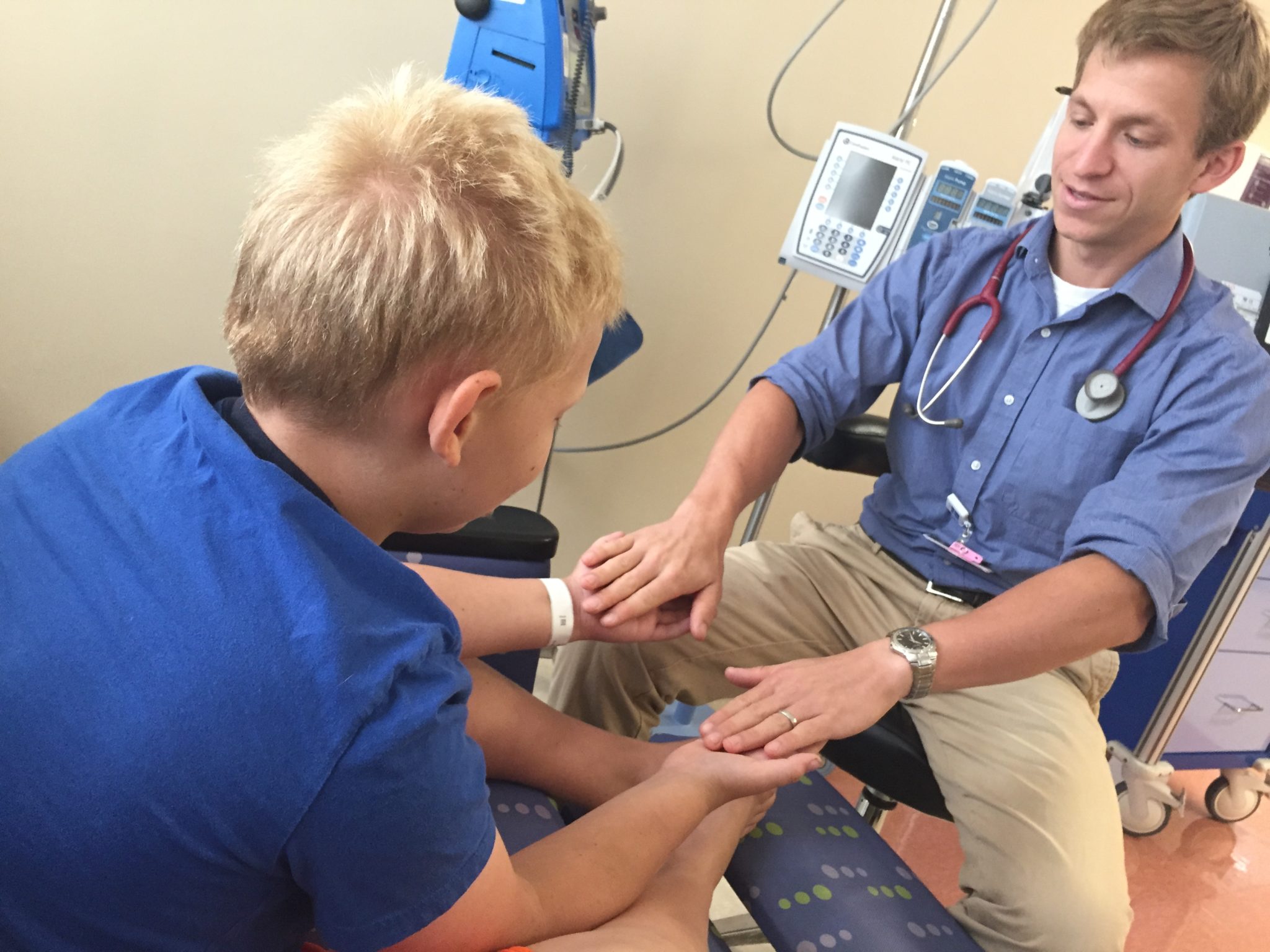 Consolidation has come to an end. Another phase of treatment is in the books–or, more literally, in The Binder. It’s an uncomfortable place to be, this in-between. But we are learning to be present. To tread water calmly, rather than struggle against the tide.

There was a strange energy in the Infusion Center today. Fridays are usually light and joyful on the bright airy floor, but today there were lots of children in pain, conflicts with nurses, and a general feeling of tension that comes with parents not knowing what to expect.

Benji’s new friend Cody was there with his father when we arrived. We were surprised to see him; we thought he’d had an afternoon appointment. His dad handed the baton to his mother an hour or so after our arrival. Benji’s buddy wasn’t very happy today. He didn’t feel like playing much. Just before his chemo was administered, he kept repeating, “Not today. Not today.” He was sad. He just wanted to go home.

Cody’s family is a few months ahead of us in their treatment plan. I suspect young Cody has reached a point where he is just sick of it all sometimes. Benjamin was extremely sympathetic. He has those days himself, so he understands completely. Cody’s mom inspired me. She was unrattled. She simply gave witness to his feelings, being truly present for her son. After comparing more notes with her (phases of treatment, neutropenia, various side effects), I found myself once again deeply thankful for this friendship I’d never have wished for.

Dr. Oshrine ordered the complete blood count that would tell us where Benjamin stands as we move out of Consolidation. He also ordered another comprehensive panel, prompted by my concern over Benji’s raised liver enzymes. I brought him the study on milk thistle. He knew one of the authors and complimented the study, approving the tincture. I gave it to Benji immediately. The doctor stuck around a little while longer to play that quick hand slap game with Benji. After he left, a volunteer came from bay to bay with a sweet therapy dog who jumped in Benjamin’s lap. The energy was lifting a little.

Benjamin’s blood counts came back. He will not be getting a bone marrow aspirate on Monday. His platelets continue to climb, his hemoglobin continues to hold, but his absolute neutrophil count (ANC) is at a profoundly neutropenic 62. The lowest he’s ever been is 60, when we were last admitted into the hospital for the common cold back in February. From 2800 to 62 in nine days. Wild. We will have a careful weekend. I asked Dr. Oshrine if it was troubling to him to see such a plummet adjacent to a rise in platelet production. He said not at all; the chemotherapy suppresses all counts symmetrically, but they recover asymmetrically. I am having difficulty seeing a reliable pattern, it’s so hard to predict. His comprehensive panel showed that his liver enzymes are starting to come down. This gave me a nice exhale.

So, the game plan now is for us to return on Wednesday. The date is based on nothing more than guessing. The hope is that by then, Benji’s counts will start to recover. We’ll stop giving him food and water at midnight Tuesday so that if his counts are high enough, he will go straight down to the Special Procedures Unit (SPU) for his bone marrow aspirate. If his counts are still “in the tank,” Dr. Oshrine will tell us when to come back to check Benji’s blood again.

I just wrote a detailed paragraph about what we expect to come next–the next lumbar puncture, the next IV medicines, the biweekly hospitalizations–but I deleted it. The truth is, we don’t know what comes next, and we won’t know, until the results of the bone marrow aspirate come back. I’ve learned that hope and expectations are tricky things. I believe that right now, staying in the present moment is what will serve my family best.

We all feel more at ease about this “delay” than we did halfway through Consolidation. We know that these holds are expected, and the lessons of trust we’re all learning are sinking in. Cody’s mom chuckled at my Binder. She had one too. She wrote down every medication just like I do, and hole punched every discharge paper, just like I’m doing. But somewhere along the way, she stopped. She found it was causing her more anxiety than fulfilling her need for control. I wonder if this will happen to me. It is what it is, she said. Acceptance. Trust.

Benji received his last two Erwinia shots today for at least two months. Hallelujah. He watched the needles, he breathed deeply. As we were taking our second lap, I asked him if he could still feel the medicine. He gave me a bit of a “duh” look, and said that it still burned all through his legs. I would never have known that if I hadn’t asked. He just doesn’t complain. The nurses deaccessed his port, then did a special “last shots Friday” dance for him, sending him off with a chorus line. We will miss the Infusion Center nurses, though we know we’ll meet again. They are angels.

After we came home, Cody’s mom texted that Cody felt badly for being grumpy toward Benjamin today. Benji looked shocked; he hadn’t even considered it. He said, “We all have bad days. It isn’t mean, it isn’t anything. It’s just life.” In so many ways, I wish I was more like my seven year old.