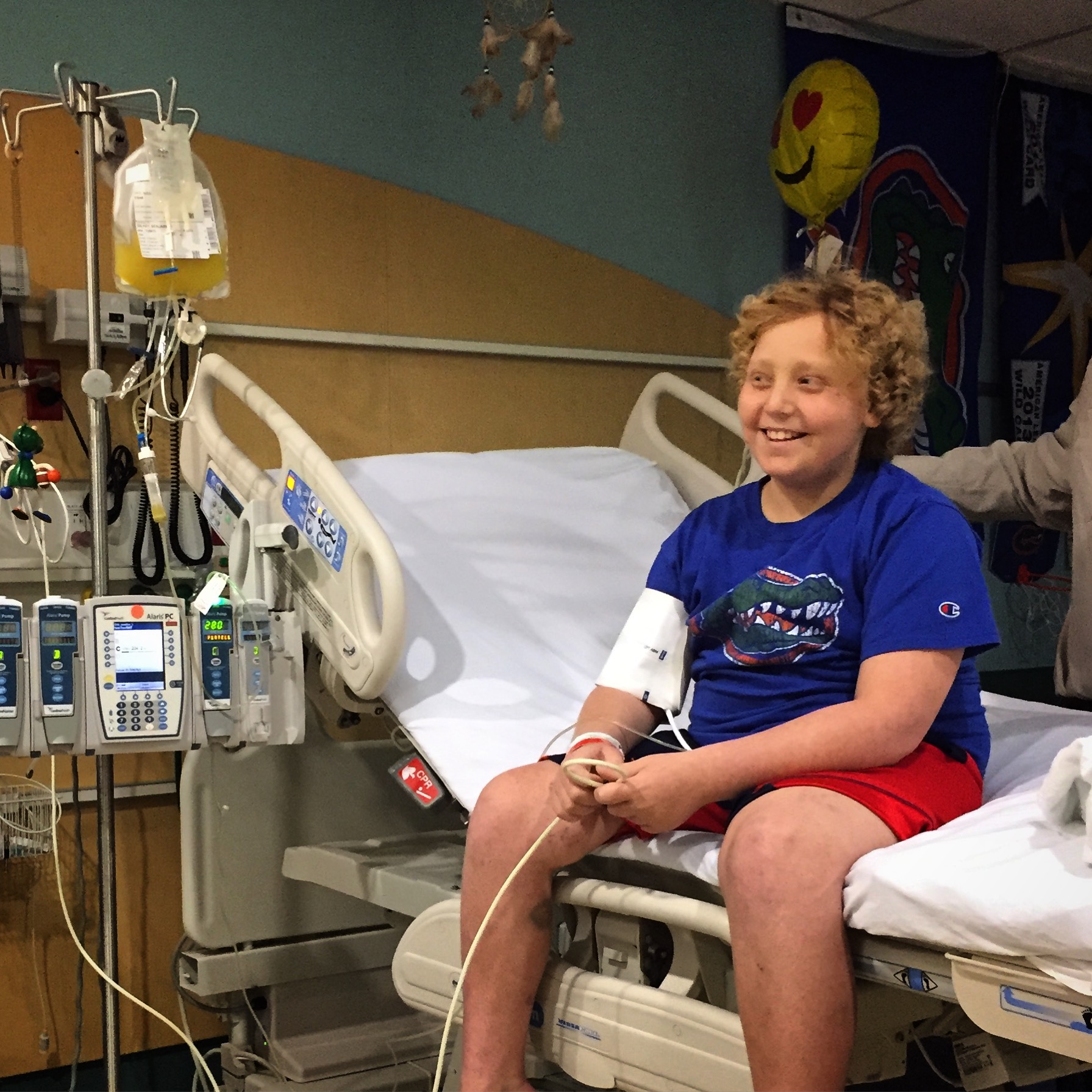 Benji asked for pain medication last night. His side started hurting too badly to sleep. So for the first time in a week, he took a low dose of oral morphine for his spleen. I turned on the television to distract him until it kicked in. The Wizard of Oz was on. The cowardly lion was just performing his monologue. “What makes the elephant charge his tusk, in the misty mist or the dusky dusk? What makes the muskrat guard his musk? Courage!”

The morphine helped him sleep, but he woke up in pain throughout the night, exchanging hot pack for fresh hot pack. At one point he began to shiver and couldn’t stop. I asked our nurse to take his temperature, but he wasn’t feverish. I covered him with additional blankets and he stopped shivering. I tried to quiet my racing brain.

The morning labs were quite similar to yesterday’s. Benji’s overall white blood cell count is a very low 260. He has zero neutrophils; no immunity. His hemoglobin is holding at 8.6, but his platelets dropped back down after yesterday’s boost, to 3,000. His blast percentage was 40.7%. Mathematically, it’s a very slight improvement, and I’ll take it. His infection risk is most concerning now. And the percentage of lymphocytes in his blood is nowhere near what Philadelphia needs, not yet.

Benji’s morning vitals showed a rising temperature. He woke up and immediately asked to take a bath, a sign that he didn’t feel well at all. His throat was sore and his spleen hurt. The rest of the morning was quiet. We had a school project to finish this morning, but I gave him a pass. Clearly.

Another new physician came in to see us today, along with our nurse and our nurse practitioner. They wanted to give Benjamin a healthy dose of platelets this morning. I asked them to please wait and check Benji’s favorite IV team nurse’s schedule over the next two days. Benji isn’t due for reaccessing until tomorrow night, but he chose to do it a day early if David could do the job. Sure enough, he was working tonight, but not tomorrow. So I asked for the platelets to be given tonight instead of this morning, as close to accessing as possible. I think it’s in Benji’s best interest to limit transfusions until his spleen is functioning properly again.

I was grateful for a restful afternoon for my boy. He didn’t eat or drink anything, but he wasn’t in any pain, thankfully, and his color was beautiful. His fever never manifested and his throat calmed down. When Michael arrived with six different kinds of chicken noodle soup, I thought certainly Benjamin would engage in a taste test, but he wasn’t interested. He didn’t want to play his guitar with the music therapist either. His energy was low all day, but he wasn’t unhappy. Just restful and sweet.

Benjamin received his 50th transfusion just before shift change. Perhaps it boosted his energy a little; he finally asked for one of the varieties of chicken soup, and ate about half of it. When the platelets were finished, Benji was deaccessed, and he took a nice long hot bath, no tubes, no Press ‘n Seal. Michael stayed to help wash and comb Benji’s hair, then he said goodnight and went home to scoop Banyan up from Kathy and Gana.

David, our IV team favorite, was supposed to be here to access Benji’s port at 9pm. We waited for two hours for him to arrive. I was growing quite concerned about Benji’s platelet levels, which I was sure were dropping by the second. Finally our nurse, who’d been trying to reach him, got a phone call. Somehow, the IV team didn’t have the orders for Benji in the system. David, who had no idea we were waiting for him, was slammed. He couldn’t get up to the floor for another hour.

I was so angry. Benjamin, on the other hand, rolled with the situation beautifully. His attitude kept me outwardly calm, and eventually, inwardly so as well. We decided to have the charge nurse access Benji’s port instead. It was a wonderful experience. He was at peace, flexible, and so, so brave. Once the needle was in and blood return was verified, the weight of what he had just done washed over him, and tears filled his eyes. I want Daddy, he said. Michael makes Benji feel strong. Just speaking his name did the trick, and his tears subsided. The nurses and I all had tears in our eyes too. The charge nurse told Benji that he was an amazing person, and that inspired her and so many other people. Yep.

Benji’s nightly vitals check put us on fever watch. I wasn’t surprised, with an ANC of zero and a sore throat that morphed into a bit of congestion. The thermometer was reading all over the map before Benji’s accessing episode, so the technician tried again after, and the number had come down. All signs point to a simple viral threat, not a dangerous bacterial one. They decided against a culture for the evening, and to let Benji rest.

We are no closer to answers, or to Philadelphia, than we were yesterday. None of Benji’s tests have come back yet, not from Washington, or Ohio, or wherever the platelet antibody testing is done. I sent my daily email to CHOP, but I know they can’t give us dates without all of the pieces of the puzzle in place.

We’ll see what tomorrow brings. I’m grateful to have a wonderful teacher in going with the flow.