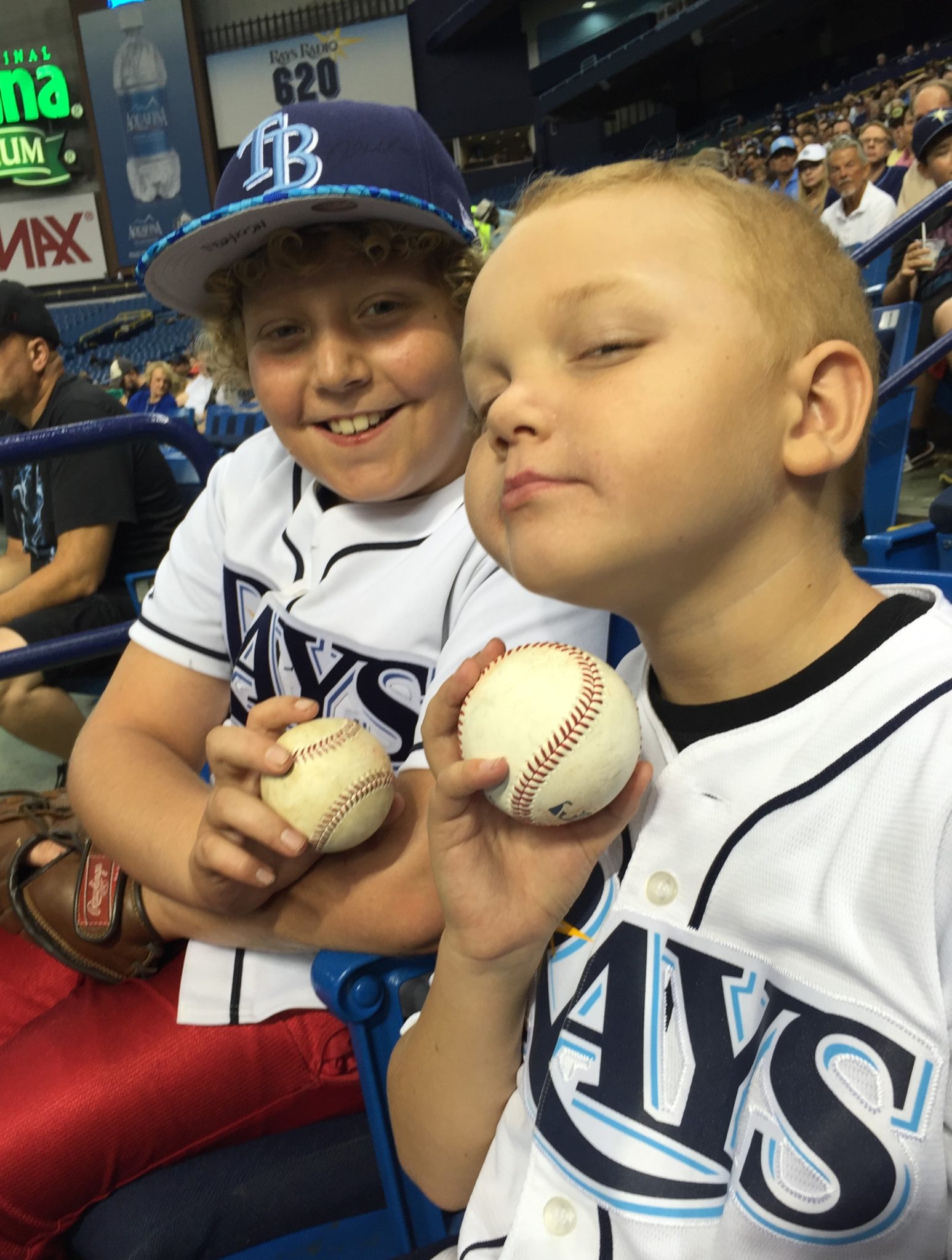 It’s our last week before school starts. Our last week to enjoy the pace and sweetness of summer. We are savoring it.

Banyan had a friend over today. After lunch, we went to several parks in town so that they could go hunting for Pokemon and Benji could cast a line or two out in the water. It was crazy hot, and crazy beautiful.

This evening, Benji and I went over the Skyway alone, for a much more enjoyable reason than usual. Our favorite nurse from surgery, Staci, has fallen in love with Benji and Cody. They adore her right back. Her father’s company has season tickets to the Rays’ games, and she gifted Kim (Cody’s mom) and me tickets to take the boys to tonight’s matchup against the Padres. They were the best seats I’ve ever had to a sporting event. Four rows behind first base, 6 seats away from the Rays’ dugout. Benji and Cody got signatures from four Rays’ players. They both got foul balls. They were treated to a Rays’ win with home runs and stolen bases and crazy fielding plays. The boys were silly and sweet and laughed hard together. They are cut from the same cloth, those two. We had such a good time.

Kim and I sat next to each other and caught up on treatment schedules, prescriptions, siblings, plans, fears. To her left was a sweet grandmotherly woman who was eyeing our boys with affection. She asked how old they were, and a conversation started. One thing led to another and we were asked how we got such great seats tonight. Kim told the woman how our boys met. As the woman was registering the information, Kim turned to me and gave me a look that spoke volumes.  I nodded back in agreement with what she didn’t say.

The silence between Kim and me is so deeply comforting. We have an understanding that is unlike any other relationship I’ve forged through this experience. Her look said, “I told this woman because I trust her. I chose to take the chance.” My feelings were validated. I have encountered this choice so many times. I’m usually right about whether or not to share it. On Saturday, at the marina, with the praying dudes, I was wrong, and I felt really yucky afterward. My silent nod in response to Kim’s silent look was to tell her that I would have made the same choice, easily, with the grandmotherly woman. She was right, and we both felt it immediately.

When the words are given and received appropriately, as they were tonight, pride and love and awe starts encircling everyone involved. It has a strengthening effect. When the words are given reluctantly and then received for selfish purposes, shame and guilt and regret sneak out all over the place, and suddenly there’s a mess to clean up. No good.

Kim and Cody left at the top of the 8th. He has started school already and has treatment tomorrow. Benji doesn’t have to worry about either of those things this week, so we stayed until the Rays took the field for high fives after their win. We were among the last to leave the Trop tonight. I couldn’t stop smiling as I crossed the Skyway home.