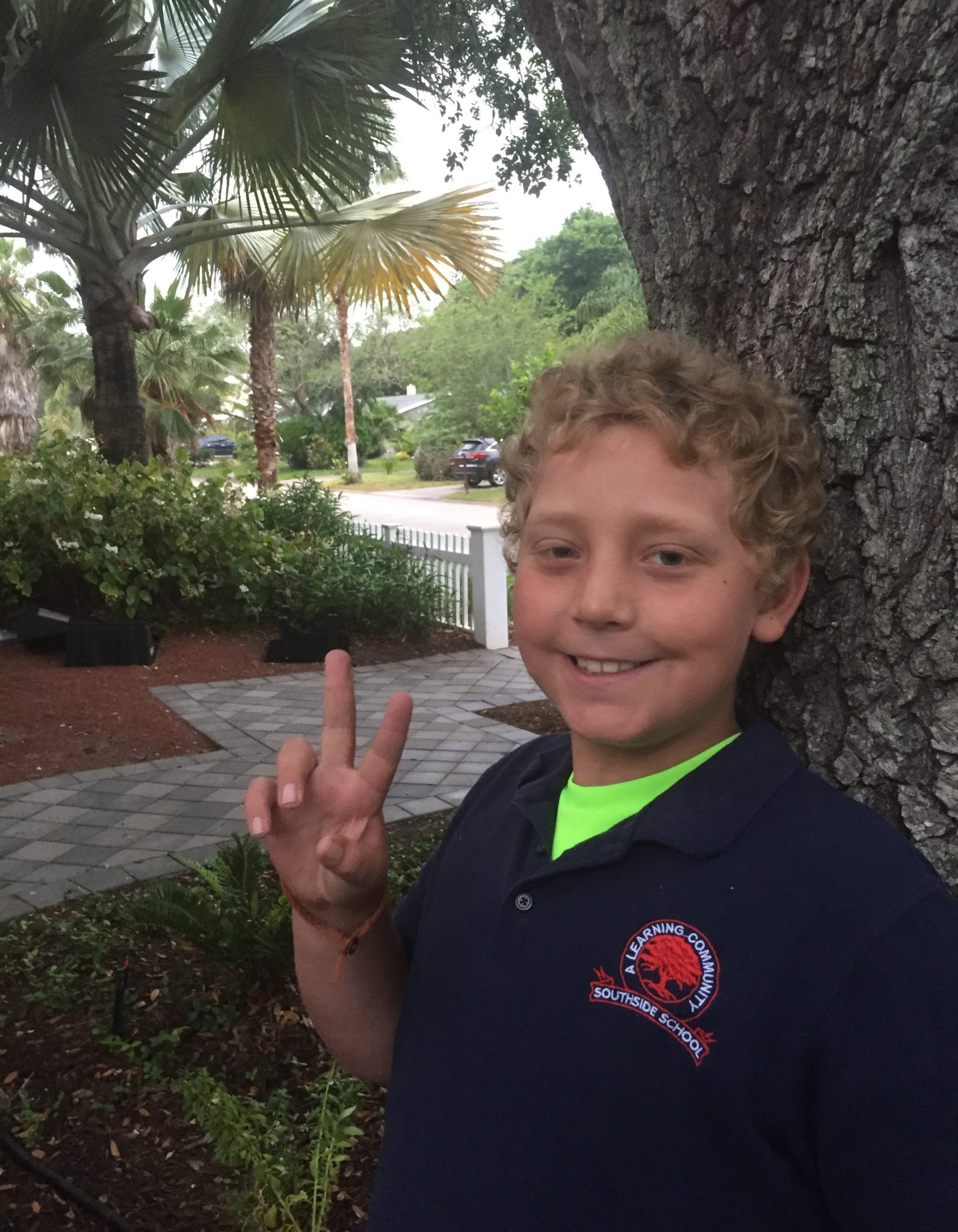 Today is May 4th. That means that Benjamin has exactly two years of treatment left to go. I calculated this morning that he is 40% of the way to the finish line. It’s another tiny milestone. Another little exhale. This is a marathon, not a sprint. But the mile markers are so encouraging.

The Tuesday staggering of the Methotrexate and 6MP has worked now two weeks in a row. Benji said his tummy hurt only a little bit just before breakfast and lunch, soothed by the food that would follow. I’m grateful for such an easy fix.

It was charcoal gray and pouring rain most of today. I had a meeting at Banyan’s school this morning to review his progress throughout this rough transition year. There have been so many hurdles but I am seeing a bright light at the end of his sixth grade tunnel. His fourth quarter grades are strong, and his confidence has been boosted by this new football workshop. He has been chosen as one of the captains. At today’s training sessions he was running drills. He was completely in his element. His light was shining. Brightly. It brought tears to my eyes.

Benjamin helped me prepare the dinner I’d leave for Michael and the boys while I went to tea. It was white chicken chili in the crockpot. Benji requested cornbread on the side. You can’t have chili without cornbread, Mom. I showed him how to make “buttermilk” with milk and lemon juice. When I poured the milk into the measuring cup, I felt his energy shift a little. I looked at him for an explanation. He said, “I can’t look at milk without thinking of sleepy medicine.”

The planning for this year’s Alex’s Lemonade Stand Foundation event is really taking off. I admit that being part of a fundraising event committee–something I did regularly pre-leukemia–is fulfilling a deep part of me and stirring up a place that needed stirring. The little girl we are benefiting, Miaya, received her rainbow star today. Her grandmother said Miaya asked to see pictures of Benji like twenty times after opening the package. She was intrigued that there was a “big boy” with leukemia (Miaya is just 3, and about nine weeks into treatment). She asked her grandmother if Benji cries when they poke him and put “tubey” in. I relayed that message to Benji, and he smiled in such a sweet, loving way. He told me to reply to Miaya’s grandmother: “Tell her not to think about it. Try to stay calm. It hurts more when you think about it.” Miaya told her grandmother, “I’ll do that when I’m big.”

Michael relieved me at Banyan’s football workshop so that I could go to my monthly tea for mothers of children with cancer. I knew I might be the only mother in attendance this month, and that’s okay. A counselor advised me to continue the group and maintain its stability. Mothers will come when they need to. I came when I needed to.

I was not alone, however. Three women from the Children’s Cancer Center in Tampa drove an hour to join me. They wanted to talk about outreach in Sarasota, and learn how they could support my efforts to connect mothers here. We talked for two and a half hours, over a delicious pot of lemongrass vanilla. We laughed and we cried. I felt connected to them and motivated by them. When we finally parted, they gave me a sweet Mother’s Day gift and three very warm hugs. I came home just in time to give medicine and kisses, and tuck my boys in.