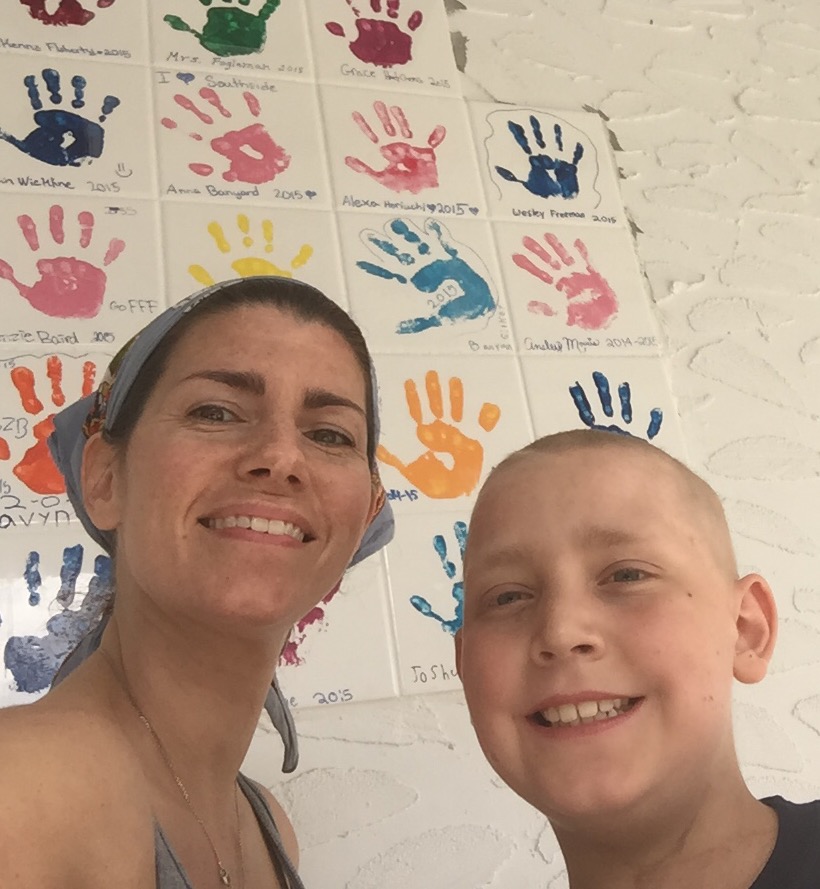 We started the day at our favorite bagel joint and things just fell into place afterwards. Life is so good right now, friends. Life is so good always. It’s LIFE. It’s the only one we experience, and we can choose how we view every single moment of it.

Benji felt great this morning. I checked his blood pressure and the reading was much more comfortable than yesterday’s. We chose not to medicate, and I called the clinic. Nurse Krista called me back quickly. She conveyed that the oncology team agreed Benji should be monitored intermittently and should not resume daily blood pressure medication. Intuitively, this felt right to me.

I felt so happy today while the boys were at school. I was riding the high of last night’s gathering at my house. I felt like everything was going to be okay, like everything was okay. I brought both boys lunch to their schools, I did a little Christmas shopping, and I even bought myself a new pair of shoes. I don’t remember the last time I did that. Honestly.

I picked Benjamin up in the car line today, because it was raining and because he’d asked me to (it allows him to spend more time with his friends). Between car line and picking up Banyan, we went to the post office. We wound up chatting with a young man who’d been in a motorcycle accident. He had broken like fourteen ribs and nine vertebrae or something crazy, and was a 1/2 centimeter away from paralysis. He was upright and walking with just a back brace on. He was so happy and warm and wishing everyone a merry Christmas. He said he felt like he had a guardian angel watching over him. I told him I understood what he meant, and wanted to tell him that Benjamin has been in remission from leukemia since May…but the line moved and the man moved and just like that, he was gone. Benji later told me he wished we had shared it with him. The man inspired us, and I’m sure Benji felt what I felt–we could have returned the favor.

We picked Banyan up from middle school. He opened the door to my car with urgency and immediately asked, “Are you okay Benji??” Benji was just fine. We asked Banyan why he felt the need to inquire, and he said he’d had a “vision” during fifth period that Benji was in the nurse’s office at Southside lying on a bed. He also said he had felt like he was going to black out, and that he had seen spots and felt lightheaded around the same time. I fear my eldest has acquired my propensity for fainting, and the precursors to it. His blood pressure and color were normal. I wasn’t worried about his health, but was extremely moved by his compassion and empathy. It was authentic.

On our way home, I started getting alert after alert on my phone. Mothers in my online group were tagging me in messages, responding to a mom whose son was experiencing methotrexate toxicity. I read her words and went right back to that place–Benji’s hospital room–where blood was being spit and skin was being swept up in piles off the floor. I stopped at a red light and texted her as much information and advice as I could. It was hard to do. I want to look forward, not backward. But I also want to wrap my arms around that mama so desperately it hurts. I wrapped up a package of Healio’s for her later to help her son with the mucositis. We’ll ship it tomorrow. I hope I can be of more help. I hope I won’t need to be.

Kathy was waiting for us when we got home, ready to treat my boys to pizza and a movie with Grammy and Noni while Michael and I enjoyed a night out with friends. We are so fortunate. We had a wonderful, rejuvenating evening, Benji took his oral chemotherapy without problem, and the boys are sleeping peacefully now.

Today, somewhere in transit, Benjamin was asking questions about what it means to be in “remission.” He’s heard it all before but needed a refresher on why he still had to take medicine until spring 2018. I likened the cells of his body to legos. Even the biggest, strongest castles are built with little tiny blocks. I explained that even the most powerful microscopes in the world can’t see all the cells in the “castle.” We needed to be sure any leukemia blasts that were hiding have been blasted. He got it. I told him that when his treatment was over in 2018, we’d throw an epic party. I told him he’d be ten. He said, “that’s so weird to think about. That I’ll be ten.” He had a big smile on his face. He was happy.