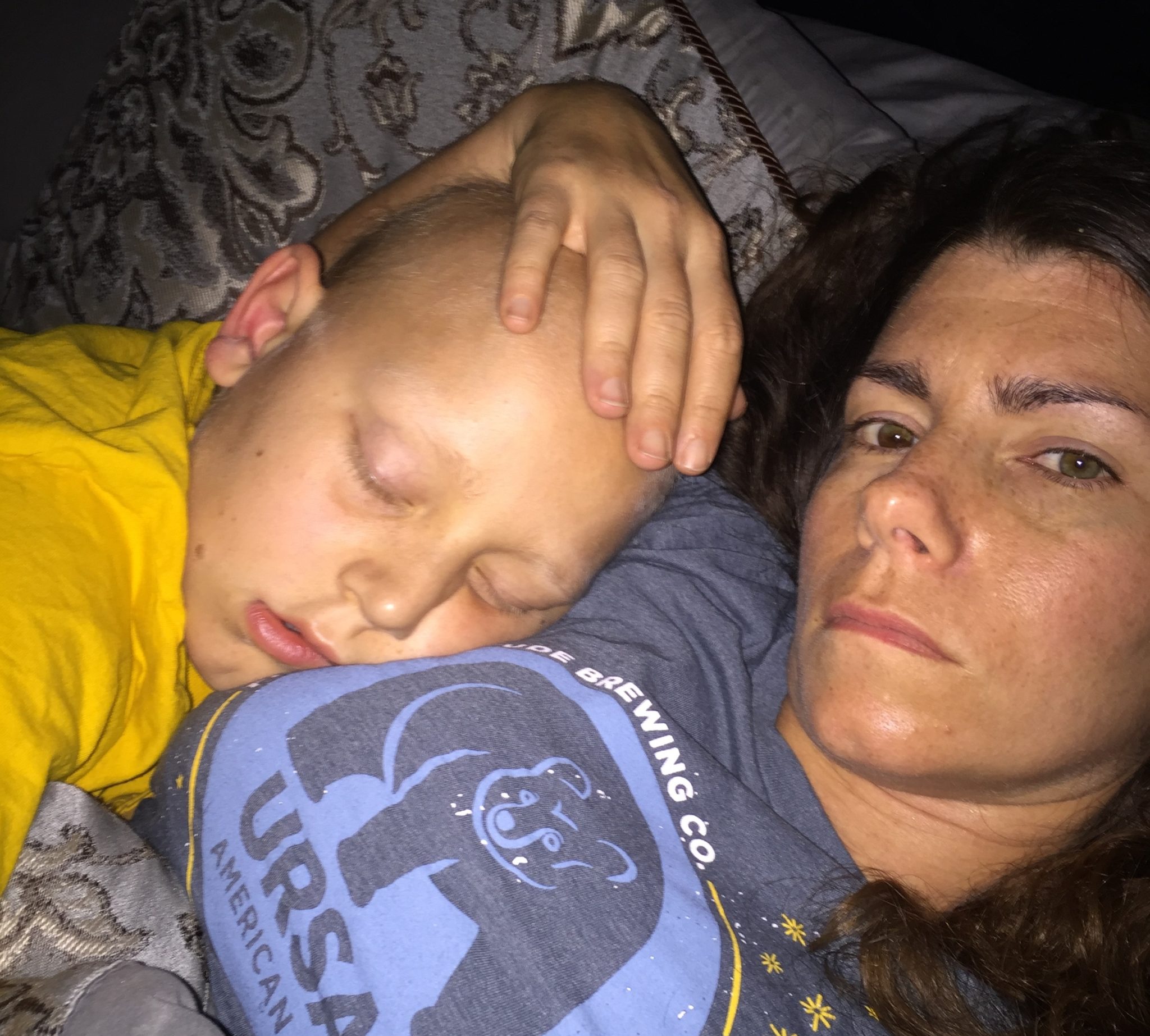 I woke up exhausted this morning, but grateful that I decided to sit with the decision of whether or when to talk to Benjamin about Hudson’s passing. I felt very clear that the time, if it is to come, has not come yet. Today we had the work of healing before us.

Michael dropped Banyan off at the bus stop today so that Benji and I could hit the road early. We arrived at the clinic, and the stalling began. He doesn’t do this when we come for the Erwinia shots; he knows how Methotrexate makes him feel. He won’t complain, but he will stall with the best of them. He pressed the button for every floor on the elevator. He took his sweet time on the way to get his height taken. When it was time to take his numbing cream off, he insisted on doing it himself, first with small latex gloves, then large, then peeling every corner of the dressing before removing it. There was a little baby screaming in the exam room a few doors down, heightening his nerves, I’m sure. Everyone was very patient.

Finally Benji asked for his oils and reached for my hand. One of my very favorite nurses accessed him today, and I knew there would be perfect blood return. There was. I checked with her to be sure there were orders for him to get a metabolic panel today in addition to a complete blood count. We needed to know where his liver numbers were going into today’s chemo.

Dr. Grana came in a few minutes later. It’s amazing how instantly that woman calms me. We talked about Benji’s Saturday adventure to the emergency room, and about the diarrhea he’s been having from the antibiotics. She asked some questions, and told me she didn’t think it had been cellulitis after all, and that she would discontinue the antibiotics after seven days (the prescription is for ten). I was very pleased with that recommendation.

We waited for quite a while–two episodes of Yukon River Run, a puzzle, and an interminable game of UNO–for the results to come back from the lab and Benji’s chemo to be wheeled in on the IV pole. His counts were fantastic. His absolute neutrophil count is at a healthy 1600, and his platelets and red blood are right where they should be. I was most pleased when I saw that his liver enzymes had gone way, way down. They’re still high, but nowhere near the danger zone.

Benji’s nurse hung the Vincristine first and set it to drip over ten minutes. Then came the neon yellow push of Methotrexate. Benji was amazing. He used his oils, he breathed, he worked his way right through the nausea and beyond it. I was so proud of him. He even asked for lunch on the way home, which I thought was a terrific sign, so I picked him up the best sandwich in Sarasota and brought one to his daddy, too.

At the office, Benji was as happy as could be. He ate his entire lunch and enjoyed being with everyone. But when it was time for us to go pick Banyan up an hour later, Benji’s tummy started hurting him really badly. He felt progressively worse as the evening went on. The only thing that gave him any relief was hot water. I should have counted; I would guess he took at least twenty baths tonight. When we ran out of hot water, I started boiling pots on the stove. He fell asleep for a moment at a time here and there–just before Michael and Banyan got home from basketball practice, and during a desperation “sleepy drive” at about 10:30pm. But these moments didn’t last long. He couldn’t get comfortable. He was hurting so badly.

Benji vomited twice throughout the night, more from pain than typical nausea. I reminded him that it’s okay to take medicine for pain if he really needs it, and I thought that tonight was one of those times. He hates the idea of pain medicine. It makes him feel like he’s not in control. But finally, just after midnight, he said he’d consider it. I called the clinic; I know that some NSAID’s are contraindicated with Methotrexate and wanted to be sure what my options were. The oncologist on call suggested oxycodone. Benji was prescribed a bottle after his initial surgery, and has used it only twice since then.

Benji was just about to get on board with taking the pain relief when he vomited again. It was awful, and took a lot out of him. When he was finished, I continued with the motions of pouring the medicine, and he looked at me with such determination and said “NO!” and marched back into our bedroom. He fell asleep almost instantly. I know he was exhausted. I think he was smart enough to capitalize on that moment of relief that comes directly after a nauseous episode. I’m so proud of him, and I hope he sleeps, uninterrupted, for many hours.

During our sleepy drive tonight, I thought about transferring Benji from the car to the bed. I knew this was physically impossible now. But I was reminded of a time when it wasn’t. I remember unbuckling seatbelts and slipping them beneath still limbs, easing my arms under his arms and lifting him up to my chest, my hand on his head. I remember beginning the gentle bounce that would keep him asleep, and keeping its tempo as I walked silently down the hall. I remember keeping my weight against his body as I transferred him into our bed, and waiting for that depth of breath that let me know it was okay to remove myself from him, one inch at a time.