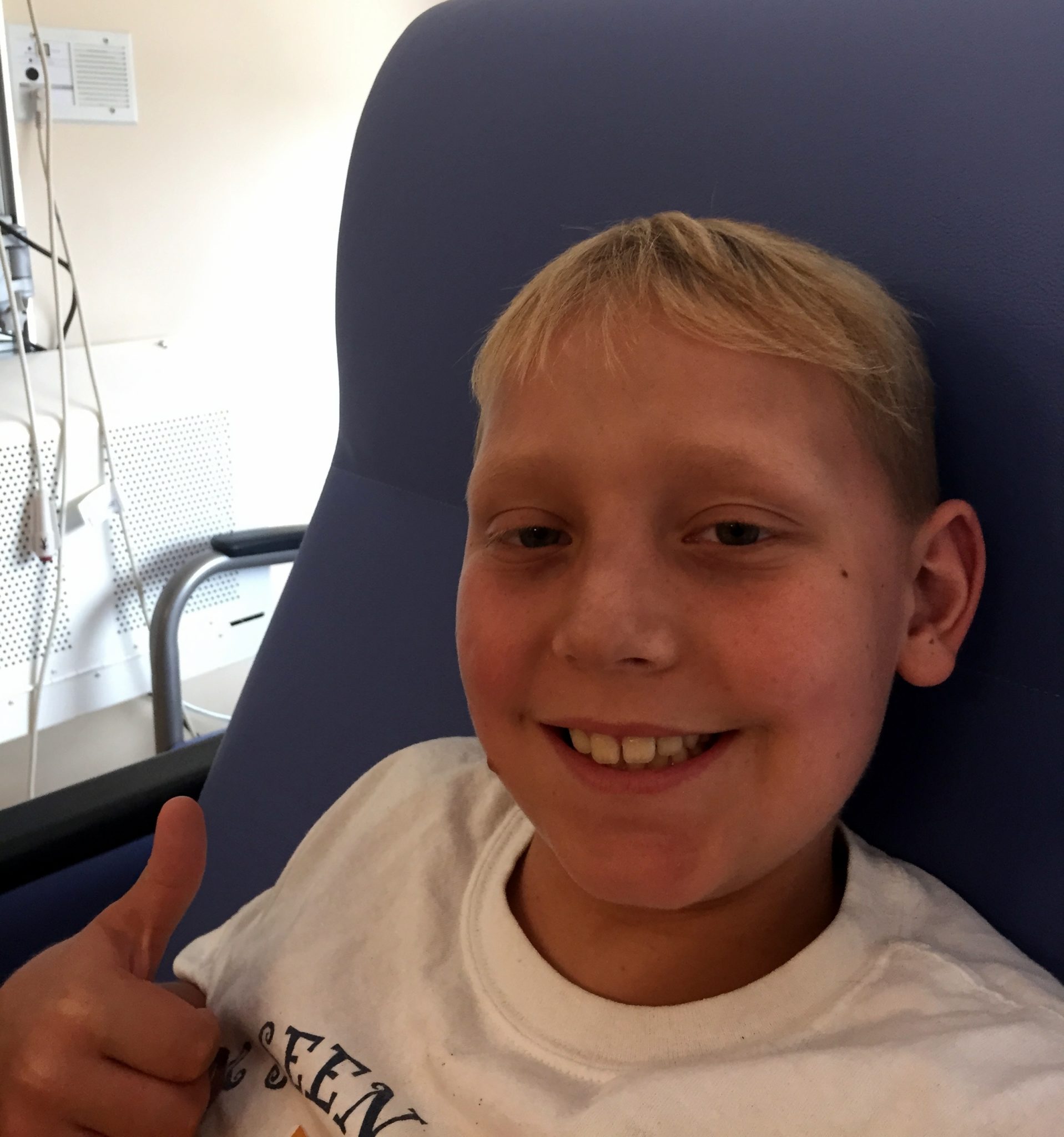 We all got a good rainy night’s sleep. When Benjamin was telling me about his beach dreams over breakfast, my own dreams took form; I remembered one in which a stranger’s hand was trying to touch Benji’s skin under his port dressing. I was screaming, “NO! Don’t touch him! STOP!” I didn’t share this one.

Benjamin had a fantastic attitude today. We were both excited that he would be de-accessed, “free” for the weekend. “And,” he reminded me, “I know how to handle the shots.” He had a confidence today that just wasn’t there Monday or Wednesday. He has really overcome a major obstacle.

It was pouring on the way over the Skyway, but we were only a few minutes late for our afternoon appointment in the Infusion Center. I was prepared to request a complete blood count, but there was already one on Benjamin’s orders. We had to wait an hour or so for the results before the Erwinia shots could be administered.

Benjamin’s blood looks perfect. His absolute neutrophil count (ANC) is dropping significantly, but is still holding strong at 2050. His hemoglobin and white blood cell counts are perfectly normal. He is exactly where he needs to be.

When the shots were ready, Benjamin was not afraid. He rolled a little calming oil onto his wrist, and we went into the Treatment Room. His two favorite nurses were administering the shots today. I’m sure this helped. But when the needles went into his legs, my admiration for my son went through the roof. I don’t know what kind of Jedi mind trick he has learned, but he was in a zen-like state. He didn’t flinch, he didn’t cry, he didn’t tense his legs. One nurse said he was “as soft as butter.” This, of course, makes the medicine enter the body more easily and makes everything burn less. He has conquered such a formidable foe. I have no shred of doubt that he can conquer anything.

We waited our necessary hour for monitoring. There were all sorts of Friday shenanigans, dances, and patients teaching nurses how to whip and nae nae. It was a happy vibe today in the Infusion Center. A great way to end an intense week of treatment.

I was ecstatic to receive a letter from Banyan when we got home. He’s having a fantastic time at Camp Highlands for Boys. It still feels so strange to be here in this house without him. Michael came home just half an hour after we did, and the three of us went to dinner. It feels good to put a tough week of work and treatment and imbalance behind us. We are moving forward.