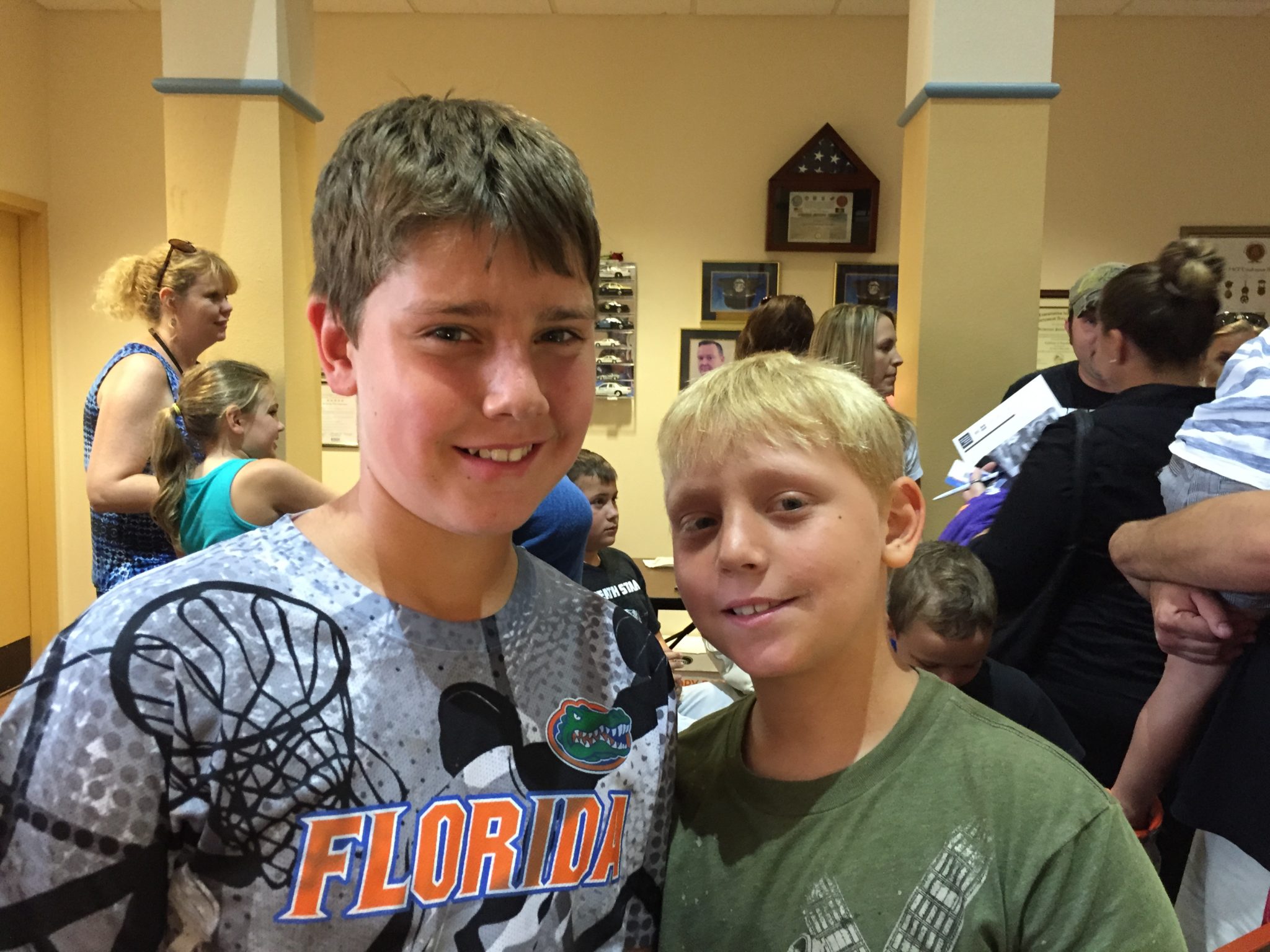 Late last night, I read an article about Gia, a little girl from our community who was diagnosed with Acute Lymphoblastic Leukemia. She began her treatment at All Children’s as well, but transferred up to Boston for T-Cell gene therapy. She will need a bone marrow transplant for long term survival. The police department in the town north of ours was hosting a “Be the Match” day at their station to try and find potential donors for Gia.

At first, when I told the kids what we were doing, Benjamin asked if he could stay home. I looked up and he had tears in his eyes. After talking to him for a few minutes I realized I hadn’t explained the situation thoroughly. He thought we were going to the hospital.

I felt terrible, and tried to give a better explanation of how the bone marrow donation process works (a process I don’t fully understand myself). I told Benjamin were were going to the police station, NOT the hospital, and that we didn’t even have to cross the Skyway. I told him that the little girl was only three, and she wasn’t responding to treatment as well as he was. I told him that he and his brother couldn’t be bone marrow donors, and all I had to do was get my cheek swabbed to see if I could be a match for her. His demeanor completely changed. Before we got in the car, he ran in his room and picked out a toy to give to Gia. Then, it was my eyes that held the tears.

The first person I saw when we walked through the doors of the police station was the mother of another little boy with leukemia. We’d met when Benjamin was first diagnosed. We hugged each other close. Her son looks fantastic. We quickly learned that so many people had turned up to see if they could be a match for Gia that they had run out of test kits. We took the paperwork home to fill out, and we will be getting our kits in the mail. It is so easy to do. Learn more at bethematch.org.

The afternoon was devoted to dusting off the warm clothes, finding the bug spray and water shoes, and packing Banyan’s foot locker for camp. Benjamin seemed to be trying to get my attention in less than constructive ways. Finally, he said, “It’s not really fair, you know,” and then marched away. I found him a few minutes later lying on my bed.

Benjamin refused to tell me what he meant by the statement. I guessed it out of him. It’s not really fair that Banyan gets to go to camp and you don’t? It’s not really fair that you can’t go to Wisconsin to pick him up? Both of these were correct. Before Benjamin was diagnosed, he was looking forward to another Wisconsin vacation, this time with his good buddy. They’d be checking out the camp for next summer together. Now his camp dreams are on hold for a bit. Benjamin said, into his pillow, “Everything is not really fair.”

I agreed with him, and cried with him, and told him he was right. It wasn’t fair that he got leukemia. But I reminded him that he was doing such a good job with his treatment. I told him that before we know it, we’ll be up in Wisconsin again, hearing the loons on Plum Lake sing their lullaby. He’ll dream about the days when he will be a camper, and we’ll wonder which little cabin will be big enough to hold our sweet boy’s dreams.