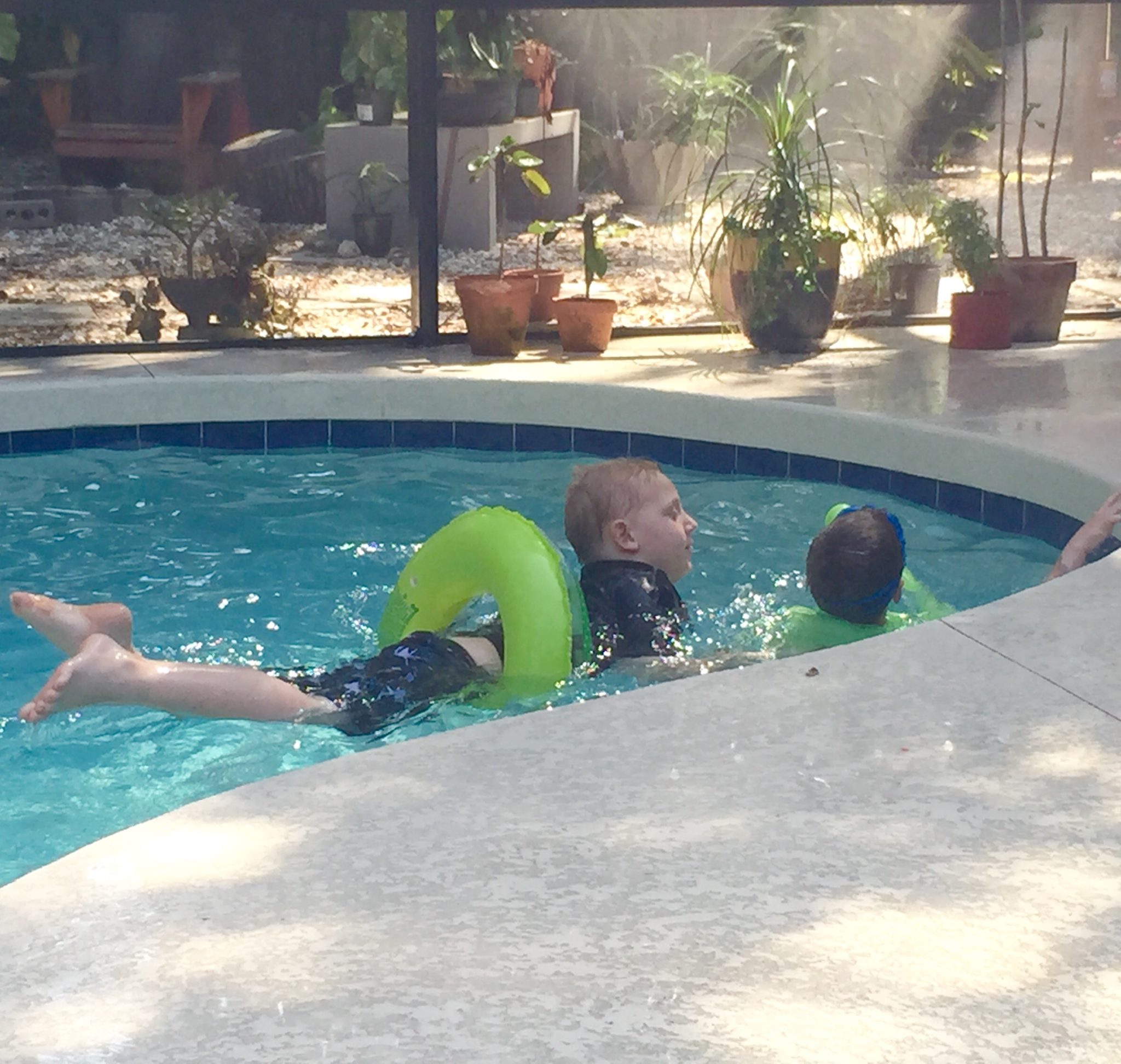 Benji woke up with intense tummy pain. He asked for Zofran with such urgency that I got out of bed running. He took it, and it worked almost immediately.  Then he took a warm bath with frankincense and lavender, got dressed, and all on his own, he sat down to take a math test. He aced it.

When Mrs. West left yesterday, she told Benji to text her every time he finished a graded assignment. That was excellent motivation. We’ve recorded three grades since! I feel comfortable giving him a bona fide Spring Break now, and forgetting about schoolwork until Monday.

For the rest of the morning, Benji’s tummy felt fine, though his taste buds are super sensitive right now. He makes elaborate things in the kitchen then decides after one or two bites that he doesn’t want them. He did make a winning batch of his turmeric oven fries, and shared them with Banyan. A hit.

After lunch, our wonderful neighbors opened their pool to the boys again. Benji has been missing his school friends, so we invited a classmate over to join him. I had to ask if everyone was healthy; it was an awkward question, but one I’ll get used to with time. Then, for five straight hours, Benji played hard. Marco Polo, Nerf gun wars, video games, football in the street, popcorn on the couch. Normal. It was so nice to watch.

A couple of times during the day, kids accidentally touched or bumped the tender site of his Medi-port. I could see him react with a nervous inward breath and a glance to me. He’s so protective of the area and I’m sure it still feels really strange to have the object embedded there. He’s speaking up about it, showing his friends the spot and explaining what’s inside. Another colossal act of bravery.

With the kids keeping each other quite busy, I was able to make some long overdue phone calls and start to make sense of the stacks of medical bills coming in. I feel confident that his treatment will be easily paid for. We have two insurance systems solidly in place now, and a mountain of support for the rest of it. So many families can’t feel this ease.

Tonight, the two kind men that planned the cornhole tournament in Benji’s honor paid us a visit, and gave us the generous love offering the event yielded. They shared stories and videos from the day that were quite emotional to watch. It still shocks me to know that the seven year old boy with leukemia they’re all praying for is my seven year old boy. It doesn’t compute.

The success of the tournament was a testament not only to their compassion for Benjamin, but to their love and friendship for Michael. It was beautiful to see the turnout from his circles–his industry, lifelong friends, and softball buddies. The support for Benjamin’s healing, and for each of us who facilitate it, has come so lovingly and so unconditionally from all corners of our world. Our gratitude grows by the day.

I’m packing my thank you cards with me as I load up for our beach staycation tomorrow. It felt so good to remove the contents of our oversized canvas bag–the numbing cream, the transparent dressing, The Binder–and replace them with goggles, sunscreen and beach gear. Even the bag is getting a Spring Break. It gets to be a beach bag instead of a hospital bag, if only for a weekend. We intend to make the most of it.