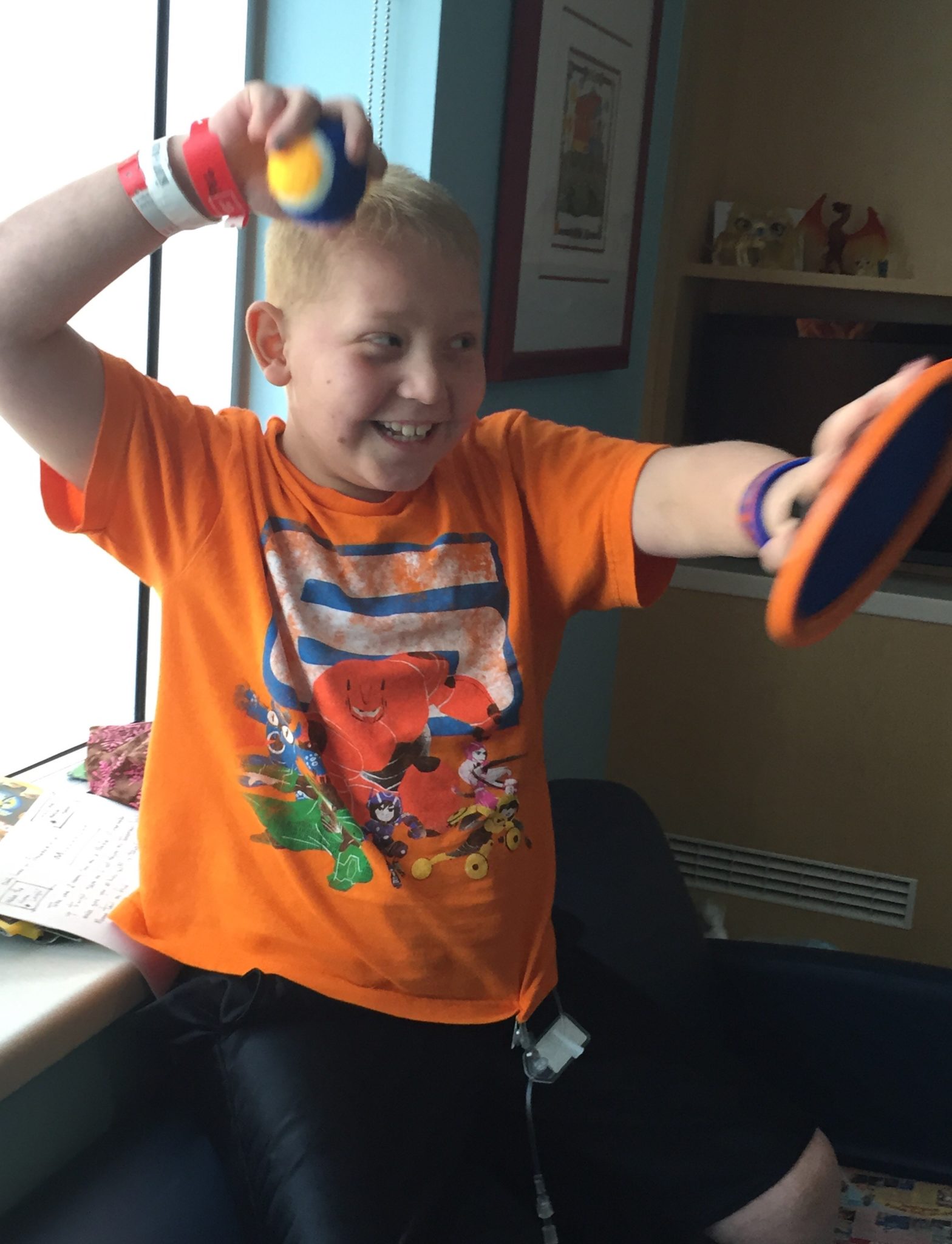 Benji loves his daddy time. Today Michael brought a ball and catching discs, and it provided a great physical outlet and a brilliant distraction from schoolwork. It’s been a challenge to make academic progress this week. But we’re getting there.

In mid-afternoon, the nurses gave us the heads up that Benji’s Erwinia shots would be administered soon. The Children’s Oncology Group protocol has a maximum dosage per leg, and since Benji’s size dictates a higher dose than the maximum, he’ll be getting simultaneous shots in each leg every time he needs them.

Benjamin took the news quite well. He asked smart questions about how it would feel, how long it would last, and if he’d have to go to sleep afterward (he knows he’s taking the Erwinia to replace the PEG he was allergic to, and remembered the Benadryl experience). We told him they used numbing cream, so he’d feel a lot of pressure but hopefully not too much pain, and it would all be over super fast. He was relieved to hear it would be more like accessing his port than a finger poke. The nurse came in with the lidocaine and smeared it on the tops of both of Benjamin’s thighs. We were on the clock.

Benji didn’t spend any of his waiting time worrying over what was to come. He was far more concerned about perfecting his prank timing on the parade of nurses, doctors, and custodians coming into the room. (Banyan may or may not have left his remote controlled fart machine in Benjamin’s capable hands.) Laughter is the best medicine.

The moment Benjamin got his first Erwinia shots was among his very bravest. He did not protest, but watched with curiosity as he steeled his little face. He squeezed my hand during the “one…two…three,” and together, two needles injected the new medicine into his muscles. Only when the nurses turned their backs and it was over did he bury his face in Michael’s chest. But just for a moment. He amazed me, once again.

We’d read that up to a third of kids who were allergic to PEG were also allergic to Erwinia. Michael and I were vigilant, but it was clear quickly that Benji was tolerating this medicine perfectly. He had a quick bite while he was monitored for any spikes in blood pressure, then we were given the all clear. We made sure he got some good time in on the stationary bike to circulate the medicine through his body and reduce his pain.

Grammy and Noni brought us a delicious Greek dinner, and brought our Banyan to us from school. It was nice to be able to sit with him a while, and focus on other problems, like math homework. In Banyan’s backpack was an envelope full of letters from his classmates, all celebrating his supreme big brother status, positive attitude and sense of humor. I know his amazing teacher had them write these letters after Michael picked him up early to come to the hospital yesterday. I’m so grateful to her for providing him with such a solid second family in her classroom.

Benjamin is so strong. He’s so active and spirited. He looks so healthy. At one point today, I stepped out of our room to get some ice. The sun was illuminating the western window on the 7th floor. A little boy was playing chess there with a guest. He was so pale and delicate he was almost translucent; it looked like the sun would shine right through him.

I asked one of the floor nurses for Benjamin’s medication record, as I’d forgotten to note one of his antibiotic doses. She pulled up the list of current patients. I noticed that Benjamin’s name was last on the list. I know it makes no sense, but for just a second, I found myself wondering if the names were in order of status. Maybe the most critical are listed first. Maybe Benji is the healthiest kid here. Maybe we don’t belong on the cancer floor. Maybe this is all a mistake.

Then I opened the door to our room, where my healthy boy, who happens to have cancer, was laughing loudly with his daddy. I gave big huge thanks, and recorded the milligrams.