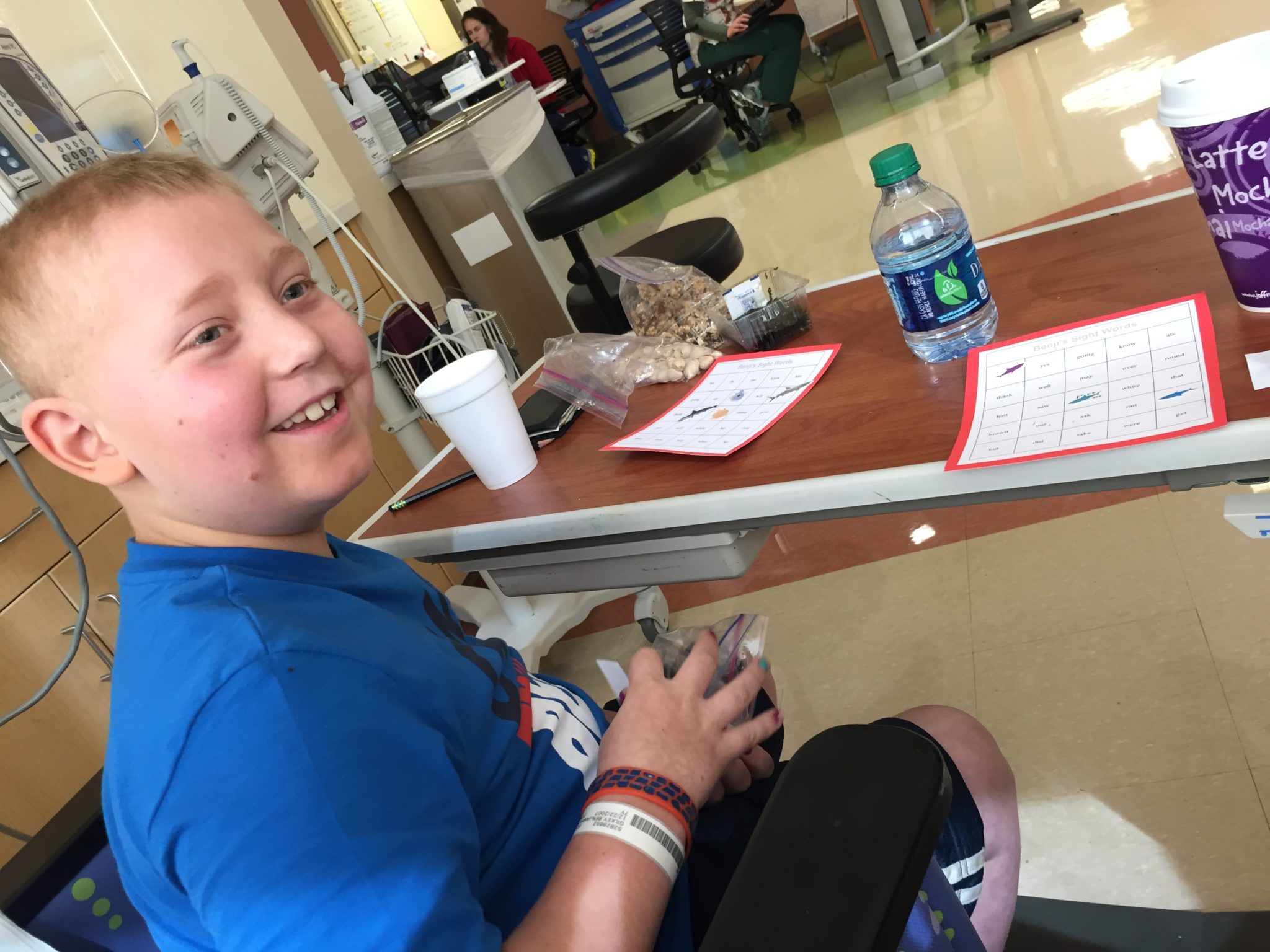 Day 40 of treatment, Day 2 of Consolidation. Another trip over the bridge, another new medicine. One day closer.

Benjamin’s chemotherapy cocktail today consisted of a second day of intravenous cytarabine, his nightly dose of 6MP, and cyclophosphamide, a new medicine he’s never had before. This one is a doozy and can interfere with bladder function, so an insane amount of hydration is necessary, both before and after administration, to avoid cystitis by ensuring that enough toxins are being adequately flushed through the system. In order to keep this an outpatient procedure, this meant a very early start at All Children’s.

I made Banyan a “Gold Principal’s Award” breakfast, then sent him to a friend’s house down the street for a ride to school. The rest of us  loaded up with packed lunches, plenty of water, and enough schoolwork and grown-up work to last the long day in the Infusion Center.

The Infusion Center was another first for us. Medicines that can be administered within a few minutes are done during normal clinic visits, but if a medicine (or blood product) requires an hour or more of drip time, it’s given in the Infusion Center. I liked the sunny windows everywhere and the open floor plan; it felt somehow less serious than the dark, closed-door exam rooms in the clinic. I also liked the nursing staff, which included an old college friend of mine. It never hurts to be on hugging terms with someone on your kid’s care team.

When we checked in, they handed us a menu from which Benji could order lunch for later. It was the same menu he had during his ten day hospitalization. I was extremely proud when he whispered to me that the food here (Standard American Diet fare) was “kinda crappy,” and he preferred the healthy lunch I’d packed. Seriously, what is UP with hospital nutrition. I just don’t understand.

Once our nurse hooked Benji up to his pre-chemo bag full of two hours of hydration, we hunkered down for a morning of schoolwork. Benji felt just fine, but he was procrastinating and being uncharacteristically defiant. One of the nurses came in during a less than polite moment. She said sympathetically: “Sometimes you just don’t know when to indulge it and when to curtail it.” My thoughts exactly. It’s hard to be the disciplinarian when your son is hooked up to an IV pole, but we still have a human to responsibly raise. We plowed through the schoolwork, but it was a good lesson for me. Common Core workbooks and spelling tests will stay home. Fun learning games can come to the Infusion Room. We redeemed ourselves this morning with three rounds of Sight Word Bingo. A great compromise.

The nurse gave Benji Zofran, after which he flushed his own port again. Then she prepared the first chemo medicine: cyclophosphamide. First, she had to measure his urine for “specific gravity,” making sure it was dilute enough for the medicine. The pee passed the test, the haz-mat cloak was donned, and the drip was administered. When the cyclophosphamide was finished, the cytarabine began. We ate lunch as it dripped. Both medicines took about an hour combined, then his IV was refilled with hydration for the next four hours.

Benji took a television break and Michael and I were able to get some work done ourselves. Aside from Benji having to wheel his IV pole to the restroom a lot from all the hydration, no ill effects from the medicines presented themselves in the Infusion Room. We were sent home at about 5pm. Benji’s color was a little off on the ride home, he was tired, and I’ve noticed some pupil dilation and minor taste bud changes. Otherwise, he’s faring quite well. Happy, quick-witted, rolling with it. Sleeping peacefully now.

In the morning Michael will go to work and Benji and I will head over the bridge for a quick Cytarabine drip–our first solo visit. I’ve had many offers of company, for which I’m so grateful. I’m sure I’ll need them as our weeks and months and years of treatment continue. Tomorrow we’ll have a nice easy morning (comparatively) and we should be home by lunch, with time enough to prepare for our weekly visit from Benji’s teacher in the afternoon.