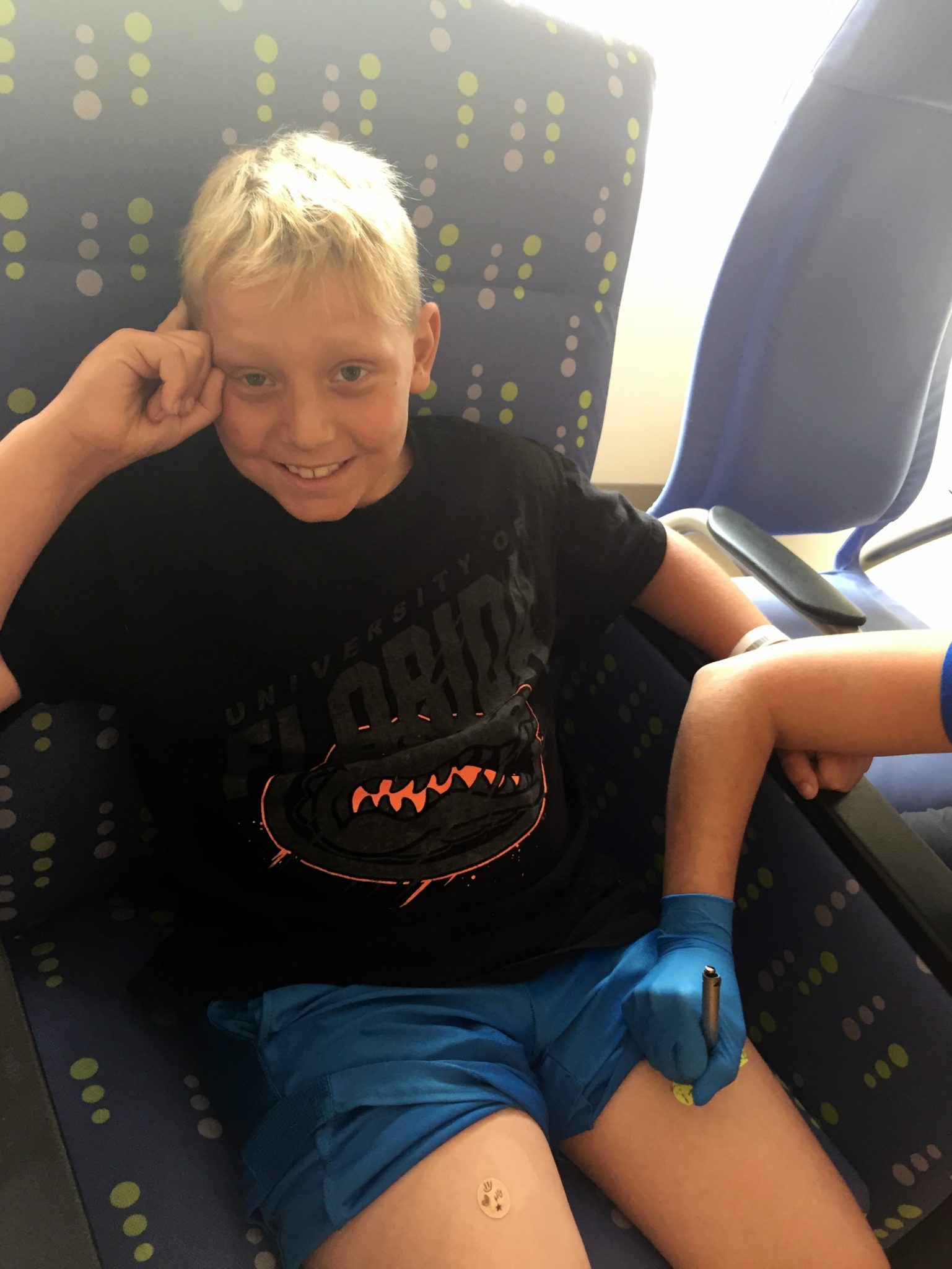 Benjamin was sad and nervous when it was time to go to the hospital today. We talked about coping mechanisms, mantras, anything I could think of to suggest that might help him feel calmer when appointments approach. He agreed to try a calming blend of essential oils that was sent to us over the weekend from The KICKcancER Movement. The amazing package contained four essential oil blends: a calming mix, one for tummy discomfort, one for strengthening immunity, and a general cancer fighting combination. It also included the contents for a detox bath, a bottle for warming water, castor oil, and a flannel blanket. Until today, Benjamin has been hesitant to start the oil regimens, even though we’ve been making our own detox baths since diagnosis. I understand his hesitation. Even if it’s only oils on the feet or wrists, it’s one more thing. But today, when he was preparing himself for the hospital’s smells, he craved lavender to replace them. I pulled out the calming blend and let him smell it. He rolled it onto his wrists himself.

Just before we crossed the Skyway, a car veered into our lane and came extremely close to running me off the road. I swerved onto the shoulder and hit my brakes before rejoining the flow of traffic. So many emotions hit me at once. I felt acutely protective of Benjamin, who had fallen asleep listening to the Charlotte’s Web audiobook, unaware of any potential danger. I felt proud of the way I’d handled the situation. But mostly, I felt angry. I have never been a road rage-y person. I don’t get angry at other drivers. People make errors. But I was so angry I was contemplating choice words and vulgar gestures. Benjamin is going through so much, and this faceless driver of the white Mazda put his hard work in jeopardy. I had to put myself in check. This anger is not serving you. It is not serving Benjamin. You’ve done your job. Move along.

Once we were comfortably in our bay in the Infusion Center, Benjamin grew nervous. Monday’s Erwinia shots hurt him so badly. I feared that today’s shots would continue the pattern. I saw him smelling his wrists several times. This made me proud; it’s a new coping mechanism that’s within his control. When the nurses took their positions on either side of his legs, his breathing quickened and the tears came. Deep breaths. Relax your legs. Look at me. You’re stronger than the pain. The needles entered and Benjamin steeled his face and remembered to breathe and pulled out all the tricks he knew. I held my breath. It worked. He had done it. He smiled, so relieved. He had endured the pain and made it through and his legs weren’t hurting like they had Monday. He had conquered such a huge fear. He started joking with the nurses, requesting artwork on the bandaids they were preparing for him.

One of the needles had a small leak at the back of the syringe. This sent me into a proper panic, though of course I didn’t let Benjamin see. We only knew because at the tail end of the medicine entering his body, a dime sized ring of the clear liquid pooled around the point of entry on Benji’s right leg. I was full of questions. Did he get enough medicine? Will he need another shot? How did this happen? Could the syringe have been opened? Could the medicine be contaminated? Will this increase infection risk? All of my questions were answered calmly and compassionately. There would be no second shot. The nurse quickly used an alcohol wipe to remove the spill and showed me the syringe, and explained how it worked. Still, I kept a close eye on that leg the rest of the day, and the nurse is going to bring it to the attention of the pharmacy.

Benjamin and I took our necessary laps around the Infusion Center. I called Michael to tell him what a rock star his son is, though he is quite well aware of that already. The comforting sound of his daddy’s voice brought the tears back to Benjamin’s eyes. I’m sure at that moment, each of them wanted nothing more than to be in the other’s arms.

We waited the hour for monitoring. Tracey, my college friend and Infusion Center nurse, arrived from a meeting, and went directly into the Treatment Room where a little girl was waiting for her. The girl was younger than Benjamin and had requested that Tracey be the one to access her port. The rest of our waiting period was filled with the sounds of the little girl screaming and crying in anticipation of the event. I felt so helpless, not only for the little girl, but for my friend. I also felt extremely grateful that Benjamin was able to rely on his coping techniques, and that his own fear hadn’t worsened today. There were many more unpleasant sounds on the floor; painful coughs, constant vomiting. I knitted furiously and muttered to Benjamin, “Seems like lots of kids are having a hard time today.” He said, “I’m glad I didn’t catch that hard time!” I praised his attitude and we sent compassion all around the floor.

Benji was a little nauseous on the ride home. On his own, he reached for my bag and rolled more calming oils onto his wrists and smelled them. He was saved. Michael’s mother and sister met us shortly after we arrived home with a warm, homemade meal, including macaroni and cheese–Benjamin’s favorite. He ate it vigorously.

After dinner, we went to watch the championship playoff game for Michael’s old softball team. The players welcomed us warmly with big sweaty hugs and lots of love for Benjamin. One of Michael’s oldest and dearest friends came to watch as well, another former player, and he brought his two sons. Benjamin was playing ball with the boys when he ran and slipped in a mud puddle. I watched it happen in slow motion and ran from the bleachers. His clothes were soaked, and his port is accessed. He had two scrapes. I could only imagine what was in that muddy water. We left the game immediately.

We took Benji’s shirt off in the car and examined his port. I gave big thanks that it was Tracey that accessed him Monday. So far, I think she does the best dressing of any nurse we’ve met. No water was infiltrating that get-up. Michael took his own shirt off and dabbed Benji’s scrapes until we got home. I kicked myself for leaving without my bag of emergency supplies. I won’t make that mistake again. We came home and started a bath, with an extra helping of detox salts. I put Press n’ Seal over the port area and Benjamin relaxed into the warm water. Once clean, dry and dressed, we wiped all scrapes with alcohol rubs–which Benjamin hated–and covered them with antibacterial ointment and bandaids. I made tea and we settled in to watch a movie.

Benjamin experienced such a wide, grown-up range of emotions today. He’d felt blissfully normal playing ball with friends. He felt embarrassment at falling, and felt guilt when we left the softball game. He felt relief and comfort when he rested between both of us in our bed, clean and dry. He felt extreme fear before his shots and extreme pride afterward. He felt compassion and empathy and love, and many other things in between. I am so proud and so inspired by my son. It’s really a remarkable feeling.