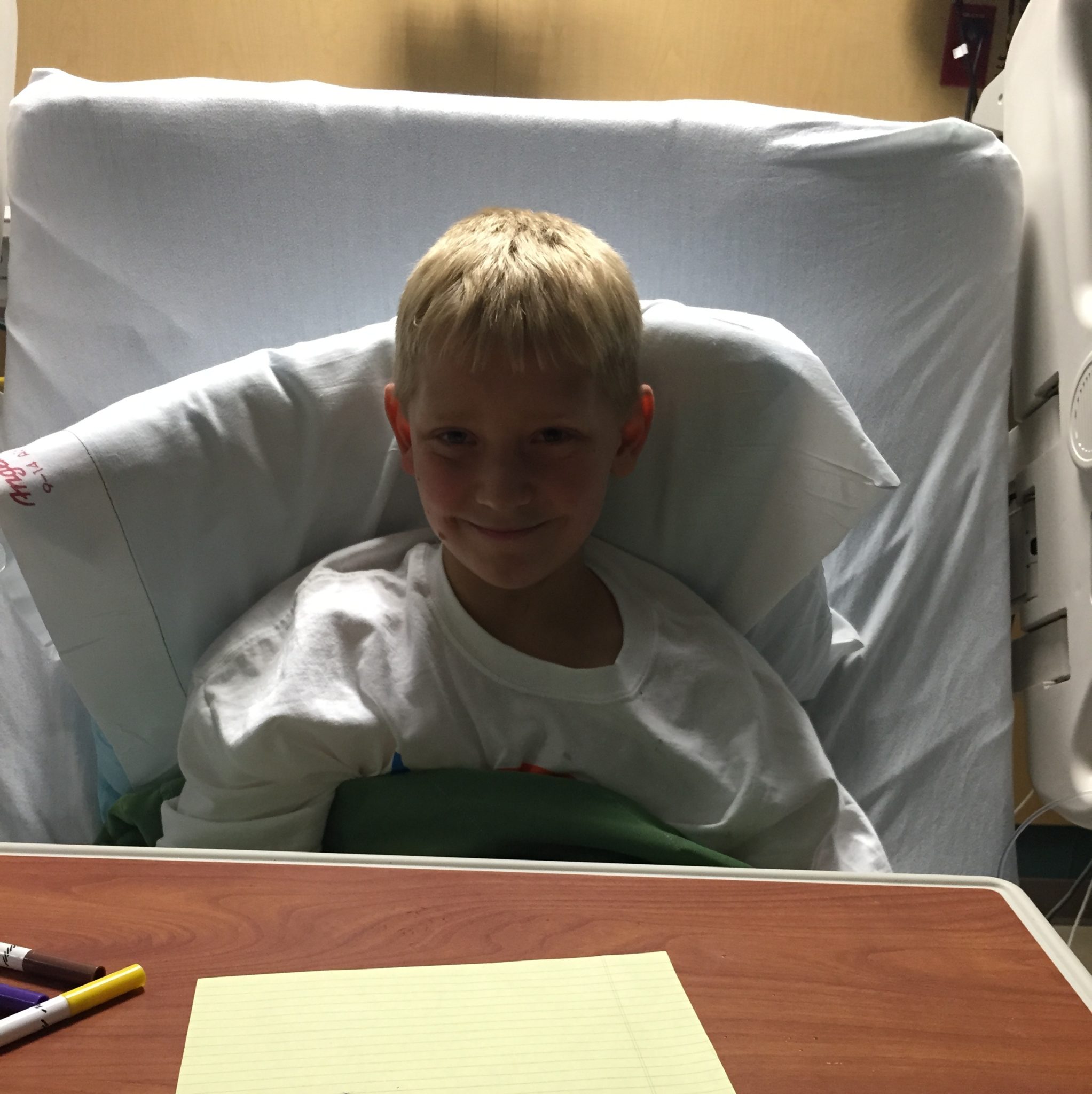 Well, we didn’t ring in the New Year exactly as planned. On New Year’s Eve, Benjamin the Brave was diagnosed with Leukemia. On New Year’s Day it was given a more specific name: Acute Lymphoblastic Leukemia. We are all still spinning from this news but feel greatly comforted in the capable hands here at All Children’s Hospital. This kind of leukemia has an extremely high cure rate–we’re told 90-95%–and we have nothing but faith in his miraculous body. He will endure his first treatment tomorrow, “Day 1” of a minimum three year journey.

Many of you have asked how this happened. I’ve asked myself that question every five minutes. In short, we give thanks for his only warning sign: frequent, easy bruising that showed up over the Christmas break.

We thought, at first, that the bruises were just a product of more rough play since being out of school. On December 26, we crossed the threshold of “this ain’t right.” We made the first available appointment with our physician, which would have been January 12th. By the 29th, we weren’t okay with waiting anymore. No one else could see him in the practice, so we insisted that they prescribe blood work and urine sampling. Michael took him to get his blood drawn on the 30th.

On the morning of the 31st, we got the results: low platelets, high white blood count and “immature leukocytes.” I didn’t know what that meant, but I had expected the low platelets; based on my research and some good friends in the medical field, I had assumed Benjamin had ITP, an autoimmune disorder that attacks healthy platelets. But the platelets were so low (13,000; normal level is at least 150,000) that we made the decision to go to All Children’s Hospital in St. Pete, as they have a pediatric hematology department. We headed north, expecting an ITP diagnosis and to be home to uncork the champagne.

The admitting ER physician was also very optimistic. But by the time Benjamin’s blood was drawn at All Children’s, his platelets were down to 7,000. And after two hours, Michael and I were called out of the room, leaving Banyan and Benji happily watching a movie in ER room 15.

The walk to the conference room was hot. Constricting. “It’s not good.” He said. By the time we sat down and he closed the door behind him, The L Word filled the room and pounded in my head. The room was spinning and it was all I could do not to pass out. I know he said many other things. I don’t know what they were.

We then met Dr. Colin Moore. I was comforted by his competent, confident, kind approach. We learned what we could about what the next 24 hours would hold, then gathered enough strength to walk back to the room and tell the boys that we weren’t going home.

We told Benji that his blood was sick and we would be here for a while to make him better. We didn’t use The L Word or The C Word that night. Not yet. We just watched for the fireworks over the Sunshine Skyway, out of the window of our new home on the 7th floor. Benji said more than once that he thought it was all a dream. I found myself hoping. Every new nurse or tech that came into the room said Happy New Year. I couldn’t return the sentiment.

On New Year’s Day we received a slew of information about the treatment plan ahead of us. The first phase of this three year (minimum) journey is called Induction, and will last 36 days. Then we move into an intense six to eight months. Then, the Maintenance phase.

Friday, January 2nd is “Day 1” of his treatment, and of our new normal. Please join our family in visualizing a strong, healthy Benjamin on the flip side of this unexpected journey.