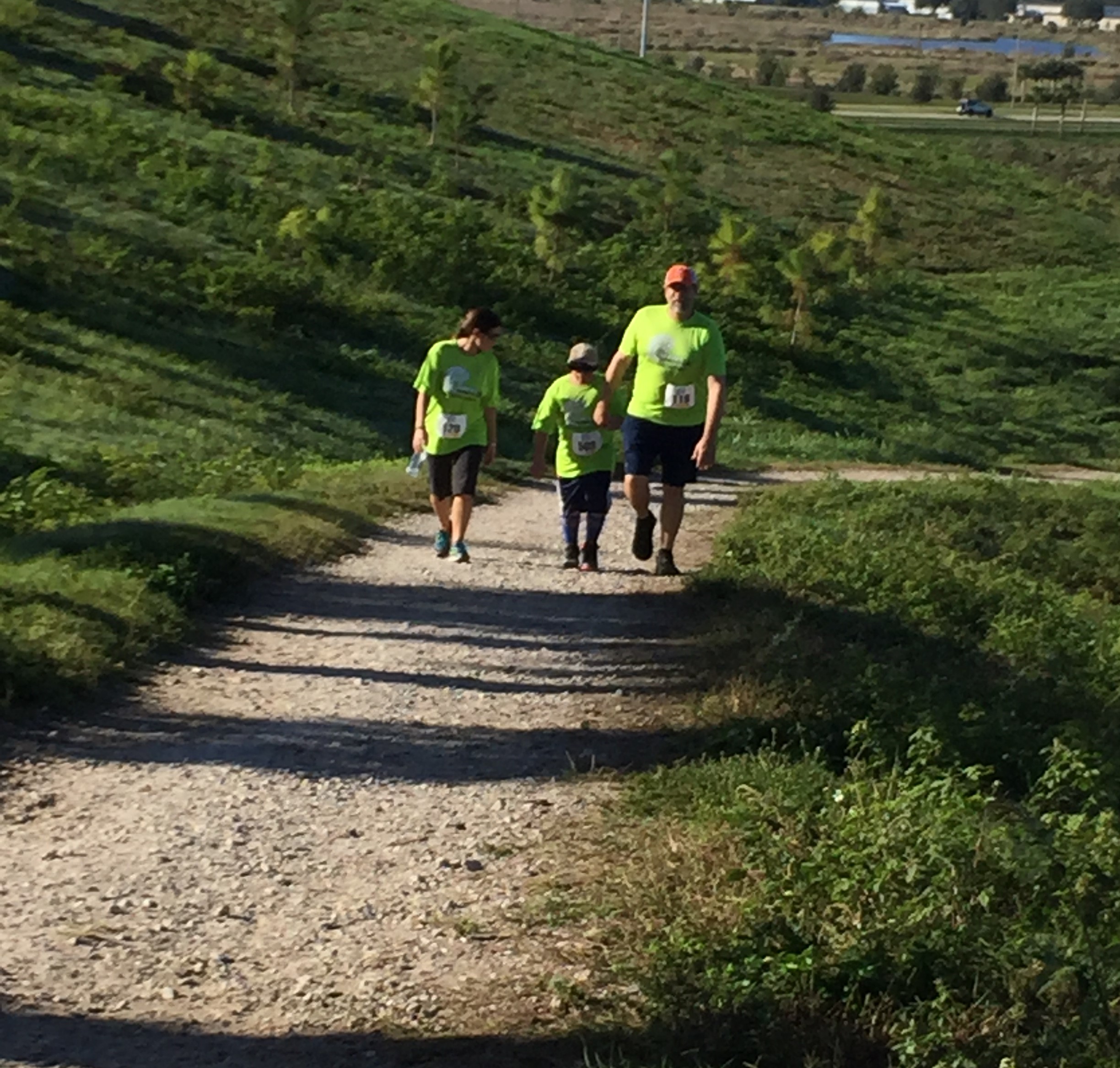 This morning, we completed our first 5K as a family.

We chased the sunrise east toward The Celery Fields, Sarasota’s highest point and one of our favorite spots for bird watching. It was the site of the annual “Lauren’s Rainbow Run” in benefit for Lauren’s One Wish Foundation. Lauren O’Hara was 18 when she passed away from leukemia a few years ago. We know her parents well. It was an honor to be there. When Lauren’s mom Jean took the microphone to welcome runners and speak her daughter’s name, I found myself feeling extremely protective of her. I was impressed with her steady voice and irritated by the people still talking over her. I shushed them. Loudly. Twice. How dare they. She is speaking her daughter’s name.

The airhorn sounded and the runners took off. We waited a few minutes, then set out walking seven deep: the four of us, Kathy, Gana, and Gana’s friend. It was such a beautiful morning and we all felt so grateful to be there…except Benjamin. He decided early in the walk that he did not want to do this. It wasn’t that he couldn’t do it. It was that he didn’t want to. He hadn’t chosen to do this.

Michael and I stayed with Benjamin while the others kept pace. We fell more and more behind. We gave him pep talk after pep talk, reminding him what his body was truly capable of, and telling him that it was his choice whether to be present with gratitude or to create unhappiness. We approached the halfway mark, where there was an easy shortcut back to the starting point we could have taken. We told Benjamin we’d stick with him, and if he needed to stop, we’d stop. He made the conscious choice to keep walking, and from that point forward, his attitude was fantastic. He had made the choice. He was in control.

We laughed, we tossed our water bottles like footballs, we joked that we were now the “sweepers” of the event. It really was a beautiful morning. We were easily a mile behind the nearest participant, and we didn’t care. Finally, we began our ascent up the steep hill toward the finish line. Kathy and Gana and Banyan were there waving. Then all of a sudden we heard the emcee’s voice speaking Benjamin’s name into the microphone. A crowd of people gathered at the finish line atop the hill. Benjamin saw the hype that was building and got embarrassed and upset. He did not sign up for this attention today. Michael and I told him to just smile as we crossed the finish line, with people clapping and crying and snapping pictures, though it was hard for him to do. But he did it. He was gracious. He was strong. He pushed through like a warrior today, once again.

Tonight at dinner, we talked about the morning. Benjamin said that walk up the hill was the worst part of his weekend. We told him that the people that gathered there to welcome him to the finish line weren’t just cheering about the race, or even about his personal battle with leukemia. We told him that at that moment, to those people, Benjamin embodied every child who has to fight cancer. He embodied Lauren. He was the personification of why the race was created in the first place. He gave the spectators hope. I think he really understood that. He just didn’t happen to sign up for it today. Or, for that matter, he didn’t happen to sign up for it at all.

Later, in my moms’ group, someone posted one of the best pieces of writing I’ve seen on what it’s like to undergo treatment for cancer. It was so powerful and so relevant to Benjamin’s experience today that I’d like to copy it here, f-bombs and all.

What’s it like to go through cancer treatment? It’s something like this: one day, you’re minding your own business, you open the fridge to get some breakfast, and OH MY GOD THERE’S A MOUNTAIN LION IN YOUR FRIDGE.

Wait, what? How? Why is there a mountain lion in your fridge? NO TIME TO EXPLAIN. RUN! THE MOUNTAIN LION WILL KILL YOU! UNLESS YOU FIND SOMETHING EVEN MORE FEROCIOUS TO KILL IT FIRST!

Also, for some reason, there’s someone in the crowd who’s yelling “that’s not really a mountain lion, it’s a puma” and another person yelling “I read that mountain lions are allergic to kale, have you tried rubbing kale on it?”

As you’re running up the mountain, you see other people fleeing their own mountain lions. Some of the mountain lions seem comparatively wimpy – they’re half grown and only have three legs or whatever, and you think to yourself – why couldn’t I have gotten one of those mountain lions? But then you look over at the people who are fleeing mountain lions the size of a monster truck with huge prehistoric saber fangs, and you feel like an asshole for even thinking that – and besides, who in their right mind would want to fight a mountain lion, even a three-legged one?

Finally, the person closest to you, whose job it is to take care of you – maybe a parent or sibling or best friend or, in my case, my husband – comes barging out of the woods and jumps on the mountain lion, whaling on it and screaming “GODDAMMIT MOUNTAIN LION, STOP TRYING TO EAT MY WIFE,” and the mountain lion punches your husband right in the face.

Now your husband (or whatever) is rolling around on the ground clutching his nose, and he’s bought you some time, but you still need to get to the top of the mountain.
Eventually you reach the top, finally, and the bear is there. Waiting. For both of you. You rush right up to the bear, and the bear rushes the mountain lion, but the bear has to go through you to get to the mountain lion, and in doing so, the bear TOTALLY KICKS YOUR ASS, but not before it also punches your husband in the face. And your husband is now staggering around with a black eye and bloody nose, and saying “can I get some help, I’ve been punched in the face by two apex predators and I think my nose is broken,” and all you can say is “I’M KIND OF BUSY IN CASE YOU HADN’T NOTICED I’M FIGHTING A MOUNTAIN LION.”

Maybe. You’re not sure – it fell off the cliff, but mountain lions are crafty. It could come back at any moment.

And all your friends come running up to you and say “that was amazing! You’re so brave, we’re so proud of you! You didn’t die! That must be a huge relief!” Meanwhile, you blew out both your knees, you’re having an asthma attack, you twisted your ankle, and also you have been mauled by a bear. And everyone says “boy, you must be excited to walk down the mountain!” And all you can think as you stagger to your feet is “fuck this mountain, I never wanted to climb it in the first place.”

Nope. Benjamin definitely didn’t sign up for this. But he’s doing it. He’s making the conscious choice to get to the finish line, no matter how uncomfortable it is. And we will be with him every single step of the way.