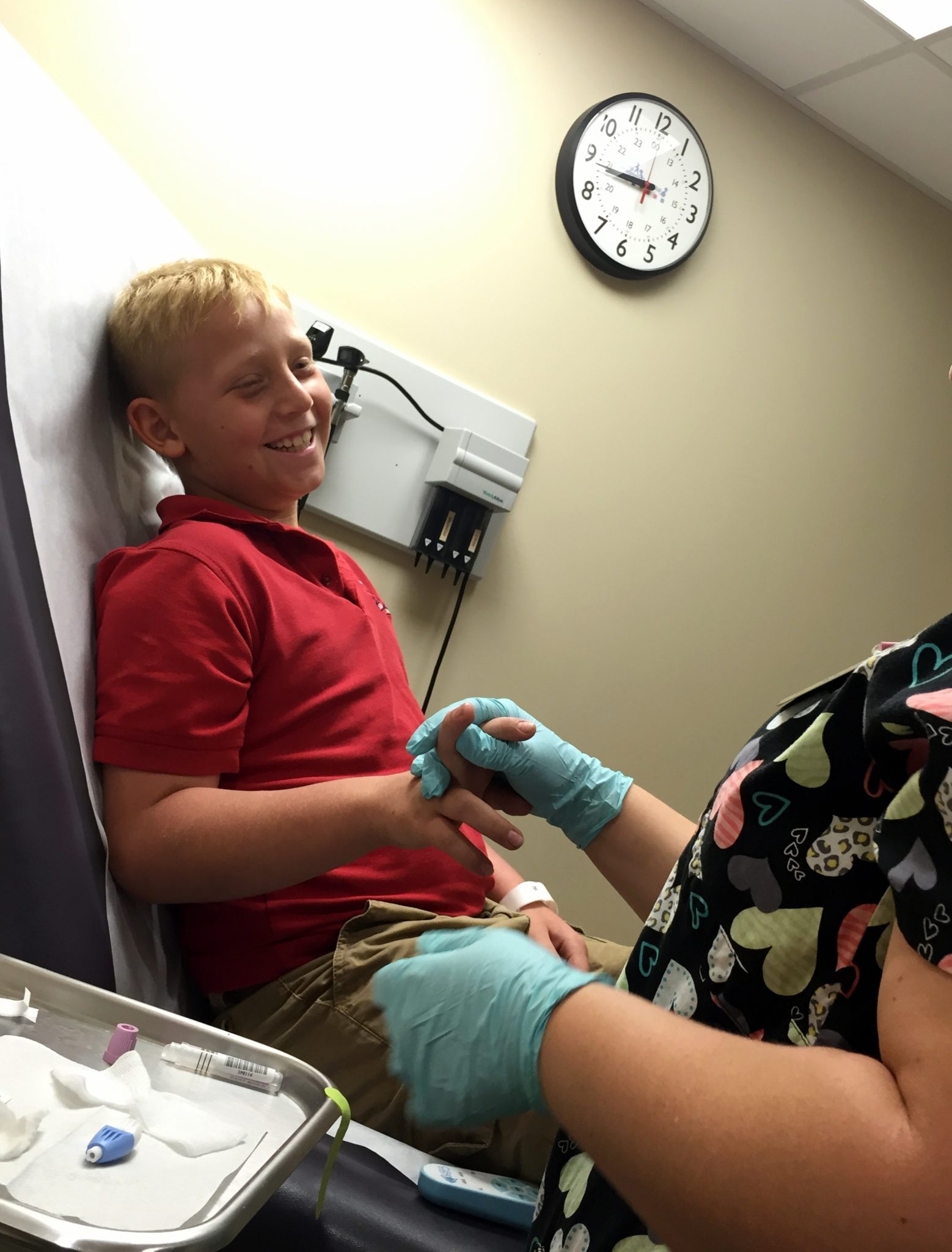 We were all up before the sun this morning. Benji’s appointment time at the clinic was an early one, so Michael offered to take Banyan to his weekly breakfast meeting and then to school. The last week of fifth grade is action packed. Today was “Tacky Tourist Day.” I helped Banyan get ready and off they went. Since going out to breakfast is a rare and enviable treat, I took Benjamin to his favorite bagel joint before hitting the Sunshine Skyway. He was dressed in his elementary school uniform, ready for his third partial school day of the year.

When we pulled into the parking garage of the All Children’s Outpatient Clinic, Benjamin let out a little groan. He just looked at me like, “Really?” He didn’t need to say a word. I know it must have been hard for him to gear up for going to school–still an event that brings big butterflies–and have to go through the clinic motions first. He was having an I’m over it moment, to which he is more than entitled every now and then. But as quick as the moment came, it was gone. He was cheerful and ready.

The clinic visit was a quick one. Molly the medical assistant was in our exam room preparing for Benji’s finger poke, when the two of them decided to speak in southern accents. Every nurse that subsequently came in was instructed to leave the room and return with a drawl. Benjamin was cracking up, even as his finger was dripping blood into a vial. I love those women.

Dr. Oshrine was back in clinic today, and Benjamin was on his roster of patients. We went over Benji’s complete blood count; his absolute neutrophil count (ANC) continues to decline, but slowly. It is now at 1300. We discussed the relative success of Benji’s last hospital stay, his odd methotrexate clearance pattern, and some little symptoms here and there we wanted to check in on. Mostly, we discussed the next phase of treatment (Delayed Intensification) which begins in late June. My philosophy of not looking ahead went out the window when Benjamin entered molecular remission. It is refreshing now to learn more about the specifics of the next phase, which will last until Benjamin begins second grade.

As we were leaving the clinic, we saw Benjamin’s buddy Cody and his mom in the waiting area. Cody had his monthly appointment for a lumbar puncture with intrathecal chemotherapy. Cody’s mom chuckled when she saw me. “You brought The Binder?” I laughed. I told her I usually bring the whole hospital bag; bringing only The Binder was a big step for me. I let her know I think about her nearly every time I record something, wondering if I could ever abandon it entirely. She said she hasn’t looked at hers in months. The thought of it made me feel equal doses of panic and relief.

We pulled back into Sarasota just before Benjamin’s class was scheduled to eat lunch. We were parking at the school when Benji realized he wasn’t ready for the cafeteria. He has overcome the fear of walking back into his classroom, but the prospect of walking into a room with hundreds of loud children, many with curious eyes in his direction, was too much. I didn’t push him. I respect Benji’s ability to overcome his fears at his own pace; he has certainly done so many times. We went back home for lunch, and I dropped him off immediately after. His friends and his sweet teacher were excited to see him. They were having the first of several class parties today. There would be ice cream and electronics. He was so happy. I asked him if he wanted me to cut off his hospital bracelet from this morning’s clinic visit. He looked down at it, then looked up with a hint of pride on his face. “No thanks.”

Our arrangement was that I would pick Benji up just before the class went to P.E.. Several first grade classes have P.E. and recess together, and Benjamin felt the same fear he had in contemplating the cafeteria. But just as I was walking out the door to go and get him, Mrs. West called. She said Benjamin had thought about it and talked it over with his buddies, and had decided to stay. When I picked him up, he was a happy, sweaty mess. He thinks that maybe tomorrow he’ll be ready for the cafeteria.

Through an experience we never would have wished for, we can be grateful that Benjamin is receiving many, many opportunities to realize his innate strength and capability. Each triumph is a gift to witness.