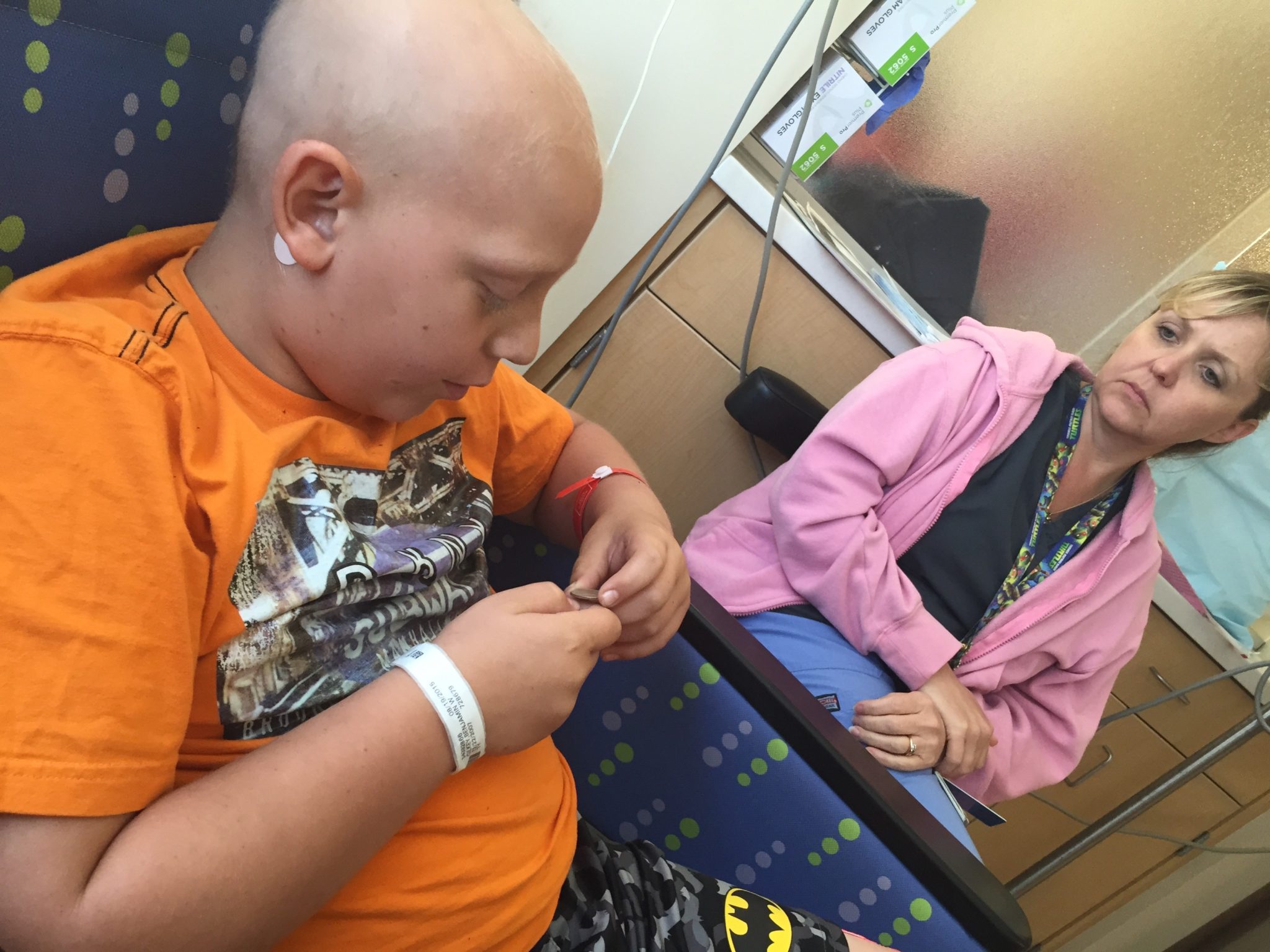 I climbed up into Benji’s loft bed last night to read to him from The Last of the Really Great Whangdoodles (we’re on a Roald Dahl break until I can restock our library). Each night he is accessed gets progressively more difficult for him, physically and emotionally. He can’t seem to get comfortable. During the day, he is distracted by play, by life; but at night, when his deep thoughts come, they all seem to land there, where the needle enters his chest. He told me last night that he didn’t think he could live another second with this needle. It absolutely broke my heart.

Once Benji was asleep, I crawled into bed with Michael and told him what happened. We decided this may be a reason to dip a toe back into the moms’ group waters. Without scrolling through the feed, I posted a simple question about discomfort while accessed, and got lots of great suggestions. It seemed the jury was split on kids who stayed accessed during long weeks of outpatient treatment and those who were accessed at each appointment. I decided to discuss this at today’s clinic visit.

We dropped Banyan off at yet another awesome friend’s house, and headed over the Skyway. Benji slept most of the way. When we got to the Infusion Center, my sweet friend Tracey came over to take Benji’s vitals and draw his blood. When she lifted his shirt, she noticed that the little blue cap at the end of his access line was missing. My heart leapt up into my throat; I knew this meant that his risk of infection had increased. Tracey reassured me by reminding me that the clamp on his tube was still securely in place. While her nursing team sprang into action, creating a sterile field, cleaning his line and replacing the cap, I began texting everyone I could think of who might find it; Michael, the friend’s mom whose house he went to yesterday, Benji’s Pilates teacher. I had to keep my face away from the sterile field, which was a good thing, because I couldn’t fight the tears. The nurses saw this, Benji did not. I felt so guilty. How could I not have checked his dressing this morning? It was a lesson, to be sure. I searched the house and the car when I got home. It still hasn’t been found.

With Benji’s rough and playful nature and last night’s discomfort in mind, I engaged Tracey in a long discussion about the risks and benefits of staying accessed for an entire week versus being accessed and then deaccessed at each appointment. What it boils down to is that the risk of infection is essentially equivalent. Some children choose to stay accessed because they hate being poked, and some choose to be deaccessed because they hate the feeling of the needle staying in. It’s a personal preference between the lesser of two evils. I texted Michael and we decided to let Benjamin make the decision, but I wouldn’t discuss it with him until after his shots were administered.

We had to wait for the results of Benjamin’s complete blood count before he could get his shots today, because his platelet levels are dropping rapidly. If he needed a transfusion, he’d have to get it before his body was punctured, since platelets control clotting. His window of efficacy from the numbing cream we’d applied was coming to a close, but the numbers came back just in time. His platelets are at 44,000, and they transfuse at 30,000. Dr. Grana gave the nurses the go ahead to give Benji his Erwinia shots.

We went into the treatment room and Benji held my hand. He steeled his face. He took his breaths. He didn’t flinch, but I could tell as soon as his eyes widened that the medicine burned more than usual. His two favorite nurses rubbed his legs and decorated his bandaids and told him how strong he was. The tears came to me for the second time, and the nurses held the space for me with their eyes, with Benji none the wiser. Those women are absolute angels. We took extra laps to move the Erwinia through his body. By the time we sat down again, he felt much better. I exhaled.

I told Benji he had a decision to make about whether to stay accessed. We discussed the pros and cons of each option. His gut instinct was to stay accessed and avoid more pokes than necessary. He knew he’d be uncomfortable at night though, and he also didn’t want to be accessed during tomorrow night’s “Meet the Teacher” event at his school. He wasn’t sure what to do, and he kept asking me what I thought. I told him I have no idea what it feels like to have a port, or to have it accessed, and that this was entirely his choice. He needed to feel comfortable and empowered. I could see that he wanted to do the right thing. I told him that one option didn’t mean he was any braver than the other. He discussed it with Tracey as well, then asked her if she had a quarter. He flipped the coin and it validated his instincts. He decided to stay accessed. I praised him for trusting his inner voice.

Before we left, I got a copy of Benji’s complete blood count. In addition to his platelets and hemoglobin being low, his absolute neutrophil count (ANC) is at 289. This is severely neutropenic. It made me question many things, like whether he should go to school at all next week. I was seeking clarity and having a hard time finding it.

My answer, when we got home, was to take a nap. Benjamin got comfortable with a video game and I set the timer for twenty minutes. It was a short reset, but it helped. Benji felt just fine when I woke up, Banyan was dropped off, and a normal, hot August afternoon on Clematis Street ensued.

Michael came home at dinner time, and I served a nice bolognese. After dinner, I went out to buy dog food, and found myself wandering the aisles. I felt lost. I don’t know why clarity was so elusive today. All things considered, Benji feels great. His treatment is right on track. He is happy. We are loved, and so well supported. Sometimes things feel hard, and I don’t have the strength to not let them feel hard. I know that’s okay once in a while.

I am lying in Benji’s loft now. Finding a comfortable position to sleep in was hard for him again, and there were more tears. It was a hard choice that he made today and later questioned. But come Friday, when he won’t have to get reaccessed, I think he’ll be very pleased. When making the tough calls, when the answers don’t come easy, we have to trust our inner voice. We have to listen. I will follow my advice to my son.