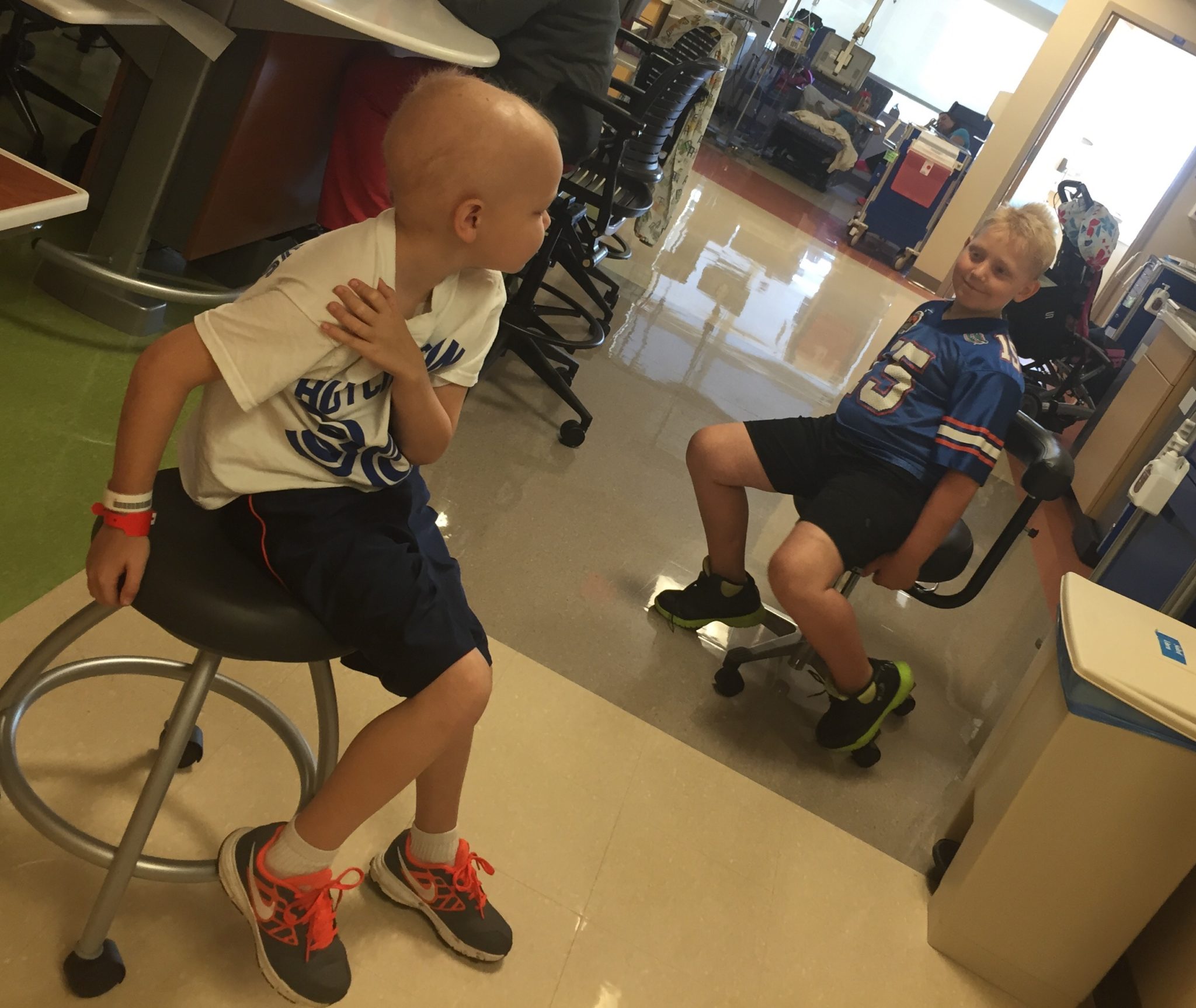 I felt calmer, happier, and more positive this morning than I have in quite a while. Everything looked crisper and more clear. I made decisions easily. Patience came when I needed it. Yesterday’s gift of the quilt has revitalized me. It helps me feel worthy of this new calling, and so grateful for the village that surrounds us. I hold in my vision a day many, many years from now when this beautiful example of community is in Benjamin’s home, wrapping his own children in love.

Benjamin had an afternoon appointment in the Infusion Center today, so he spent the morning with Grammy (Michael’s mother) while I took Banyan to the dentist, and to tour a third middle school. Our eldest boy will be making his choice this month. I’m so proud of him, and excited for this big new adventure.

Grammy was waiting for me in the parking lot with Benjamin when the tour was over. We swapped kids quickly; she took Banyan back to school for me so that I could get Benji to St. Pete in time for his 1:00pm appointment. I am so thankful for her help. We pulled into the parking garage at 1:00pm on the nose.

As always, the first order of the day was a complete blood scan. Benjamin’s hemoglobin is holding steady, but his platelets have continued to drop. Today they were at 20,800, well below his 30,000 mark for transfusion. I knew this without needing the blood draw; when I put the numbing cream on his legs, there was significant new bruising around the spots where his last shots were administered. The nurse ordered the platelets. Benjamin’s absolute neutrophil count has also dropped, down to 280. It’s still a decent number for this stage. It’s above discharge protocol should we be admitted. Lots of kids are at zero during the end of Consolidation. 280 is a lot higher than zero.

While we were waiting for platelets, Benji hopped on one of the nurse’s spinning stools and started wheeling down the hallway. This is frowned upon, of course, but the nurses in the Infusion Center are so amazing, pushing boundaries to make the kids as happy as possible. I went to follow my wild child, and he had found another little boy wearing a big sweet grin and engaged in the exact same rebellious stool spinning act as Benji was. He had made a friend.

Cody is also 7, three months older than Benjamin. He shares Benjamin’s exact diagnosis and is a few months ahead in treatment. His mother was expecting remission after his Day 29 bone marrow aspirate, just like we were. Benji’s Minimal Residual Disease (MRD) from that scan was 0.03; Cody’s was 0.04. Cody wore a baseball shirt, sparking their first topic of shared interest. They were both cracking jokes with the nurses, and exchanged a few favorites. I told Cody that Benji needed to do schoolwork today, but that Cody looked like a lot more fun. He said, “Yeah, I get that a lot.” It was uncanny, their shared spiciness. Cody has a four wheeler, Benji has a four wheeler. Benji is allergic to PEG-asparaginase, so is Cody. Cody has heelies, Benji’s are on the way. Uncanny. When it was time for Cody to leave, the two of them were darting down the hall together, stopping intermittently to find hiding places. Cody’s mother and I had to tag team them; she took one hallway and I took the other, setting up a trap. They were surrounded, laughing the whole time.

I have met a lot of online moms through this experience, but I keep them at a distance. I’ve only messaged privately with one of them. In person, aside from Cody and his mom, we know just one other family by name. I realized today I’ve kept it this way intentionally. Occasionally in the online group I see words like “relapse” or “hospice” and I run away. I put my head in the sand. I am not strong enough to put those words in front of me, let alone get close to people who may experience them. We’ve seen Cody and several other kids enough times to know their faces, but we’ve never reached out. Until today, when an unexpected connection was too strong to ignore.

Now, I feel so grateful for Benji to have found this boy. His mother and I talked for quite a while. We used similar words to describe their amazing attitudes through this experience. Her expertise was invaluable. Cody has just lost his hair within the last couple of weeks. He’s in Delayed Intensification, the phase that waits for Benjamin about six weeks from now. Benji and I talked about this, and he looked so much more confident than the last time the subject came up. “I want to lose my hair!” he said, clearly emboldened by the glory of this new friendship.

After Cody left, Benji and I returned to our cubicle, and he started feeling really tired. He was pale, his pupils were dilated, and he looked weak. It was surely a combination of low blood counts and his rowdy spin around the Infusion Center. We were settling in to do schoolwork, and I looked at that face and said nope. We can do this tomorrow. His first of two bags of platelets were hooked up and dripping. He rested, watching television, peaceful and content.

Benji shut down the Infusion Center today. He was the last patient there. Any time blood products are administered, a patient has to be monitored for signs of allergic reaction. This time period had to pass before Benji could have his Erwinia shots, then he had to be monitored again after those. He was a little more sad than usual about the shots today, but only for a moment in the car on the way over the bridge. Once he was in the Infusion Center, he did what he had to do, as brave as ever, readying his face, watching the needles, holding his breath. When it was over, he exhaled and took his laps, pausing only to sneak a Scooby Doo sticker onto the back of an unsuspecting nurse.

We came home to dinner on the table, courtesy of Grammy, who had picked Banyan up from school and supervised homework hour. Noni joined them, and Michael had just come home from work, when we pulled in the driveway to see them all playing basketball in the front yard. I was so grateful, so happy to be home.

Just as I was getting ready to put the boys to bed, Benji started complaining of “loose tape” on the dressing over his accessed port. I looked; sure enough, some of the tape and a little of the dressing had come loose, just a tiny bit, on one side. I remained calm, but kind of started panicking inwardly. Any opening is an invitation to bacteria. I took a picture and texted it to Tracey, my old college friend and Infusion Center nurse. I’ll digress a second and give thanks for her here–I think so often about our college days, and how I never in a million years would have imagined that this is how we might meet again. But having a friend to whom I can text a late night panicky picture is worth so much, and she’s just so kind. I’m so thankful.

Tracey suggested cleaning the area with alcohol and taping it down solidly, then calling the on-call oncology physician. I asked her if she thought I should take him to the Emergency Center to be re-dressed; she reminded me that there are much more serious bacteria waiting in the EC than here at home. After speaking with her, with Michael, and with the on-call physician, we decided firmly against the EC and that we will call the clinic nurses in the morning. Since Benji isn’t due back until Friday, they may want us to come back over the bridge tomorrow to have the site re-dressed.

I ran into some friends at the drugstore when I darted out to get the alcohol wipes and tape. I know I must have sounded manic, talking a mile a minute about dressing and bacteria. If we can just make it through this weekend, the last of this nadir period, his immunity will begin to rise again, and with it, our peace of mind.

I’m thankful for community, for family, and for friendships new and old tonight.