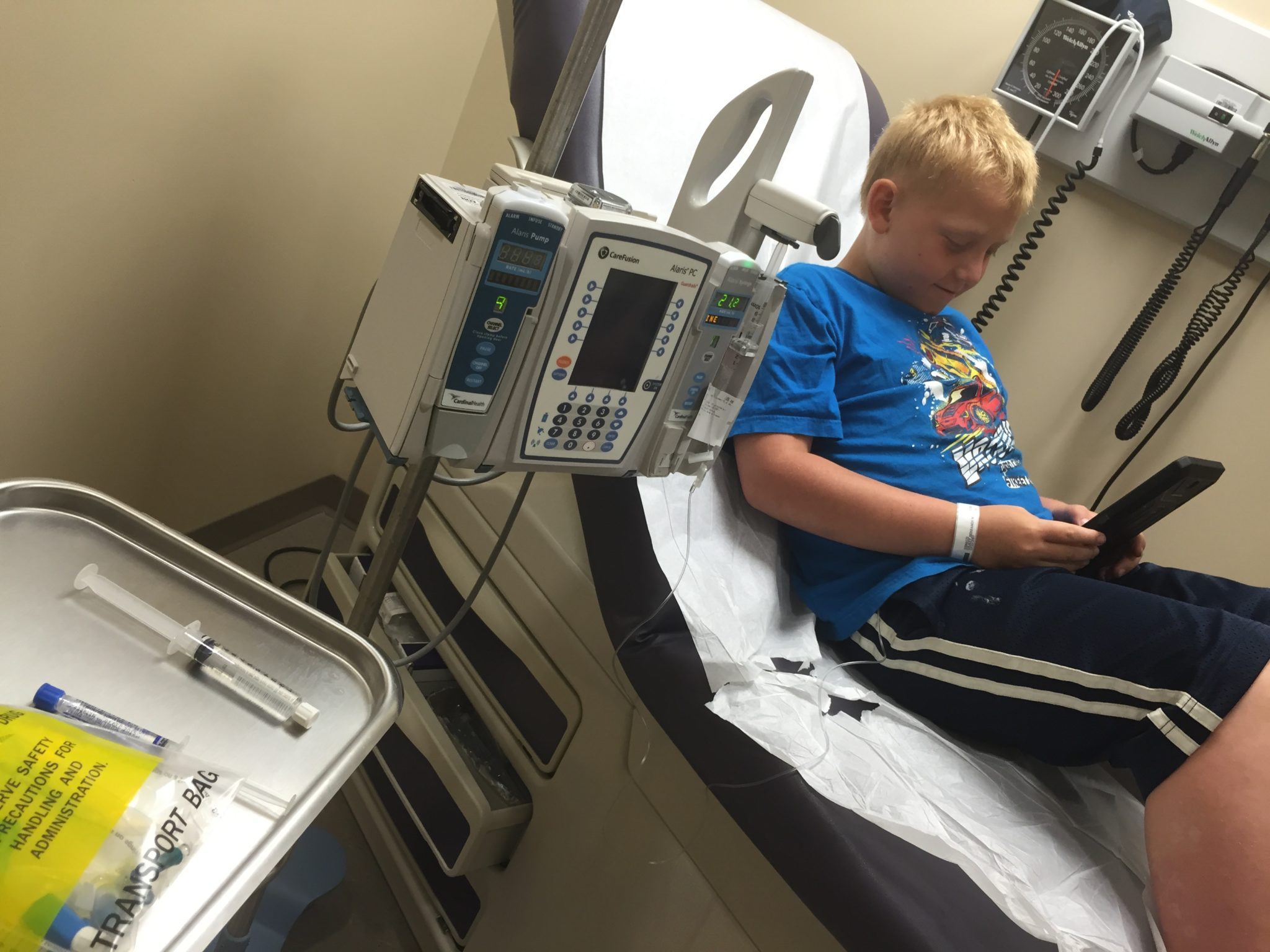 Five bald eagles on the way over the bridge this morning. FIVE. A good sign.

Benjamin’s Zofran is back on track. He slept well last night and didn’t need the medicine until it was administered intravenously prior to today’s chemotherapy. We did schoolwork while we waited for the doctor to check in on us.

Under the bright lights of the exam room, I noticed some tiny red dots on and under Benji’s eyelids. They looked like petichiae, or pinpoint sized bruises, something I hadn’t seen since the early days after his diagnosis when his platelet count was super low. They were hardly noticeable, too small even to show up on a photo I took to try to send to Michael. Yesterday’s blood count had shown a platelet count within normal range. I was confused.

We were on Dr. Grana’s rotation today, one of our favorites. She looked at Benji’s eyes, and during the careful examination that followed, we found a few other places where petichiae had cropped up. She decided to draw another complete blood count. The results showed drops in all three numbers we are watching–platelets, hemoglobin, and absolute neutrophil count (ANC)–but not significant ones. Certainly not low enough for transfusions (yet). Dr. Grana suspects that the two somewhat violent vomiting episodes yesterday caused the petichiae. She explained that even though Benji’s platelet counts are strong, their efficacy may be reduced by the chemotherapy. This would explain the bruising we’ve been seeing intermittently. She also pointed out that he is a “rough and tumble boy.” Really. You don’t say.

After two more math assignments, our nurse came in, administered Benji’s Zofran, and hooked up his Cytarabine drip. It was ten minutes before Benji’s class would go to lunch, so we took a chance on a HopeCam connection, and it worked! He Skyped with his teacher and his friends while he was getting chemotherapy. Unbelievable. I think this HopeCam connection has benefits beyond keeping cancer patients connected to their classrooms. Benji LOVES it, of course, but I also see a room full of six and seven year olds who are learning what cancer means, and who are watching their friend go through it all with positivity and humor. An irreplaceable experience.

On the way home today, we stopped by the Center for Building Hope to pick up our weekly vegetables, generously donated by Aloe Organics. Benji picked out lettuces, onions, tomatoes, one pepper, some turnips, broccoli, collards and two heads of cabbage. The folks there are so kind. We’re excited about roasting the turnips and cabbage–but not until tomorrow. Tonight’s dinner was generously prepared by a dear friend. I was so thankful she brought her sweet boys with her to deliver it. While Benji’s counts are good, I’m happy to see him squeeze in all the playtime he can.

I am tentatively tuning in to part two of Cancer: The Emperor of All Maladies tonight. After reading a good portion of the book, I thought I’d be prepared for the film. While it leaves me with overwhelming gratitude, it also fertilizes seeds of worry I’ve been smothering for three months. It’s one thing to read a historical, scientific book at my own pace. It’s another thing to watch a movie with real people and appropriate background music. Leukemia was a big focus of the first installment of the film. I cried for the parents on the screen. I cried for their babies. I cried for us.

So many people have told me “you’re so strong” for “staying so positive” through this process. I feel like it’s quite the opposite. I’m a total coward. I refuse to give energy to the negative; I am petrified that if I feed it, it will grow. So I don’t even acknowledge it. I pretend it doesn’t exist. Maybe if I ignore it, it will simply go away. I turn my back on the scary things and focus instead on the many things for which we are thankful. They are everywhere. They are beautiful. I want to give them energy because it feels good. I’m simply choosing easy over hard. Beauty over pain. Thank you is my prayer, and thank you is my salvation.