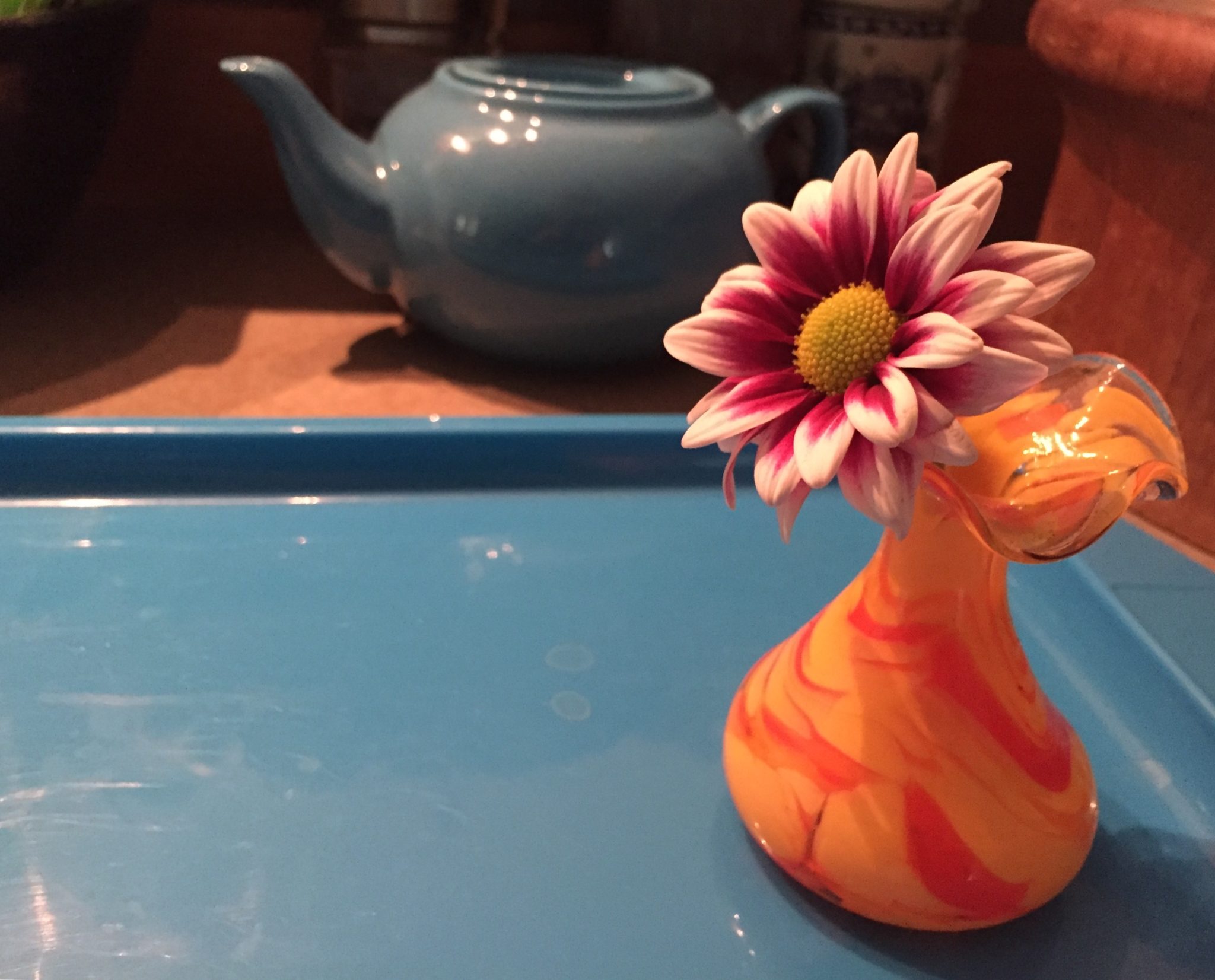 Today was a really hard day. Benjamin woke up in pain, with his spleen hurting as badly as it did last night. I gave him a dose of morphine and helped him get as comfortable as possible. With the exception of a few hot baths, he didn’t leave our bed until early evening.

Benjamin’s pain this morning was pretty localized, so it didn’t prevent him from eating. First he requested some potatoes, then some strawberries. I put all of his food and drink today on a tray with a little flower in a vase. He loved this service. His smile when he first saw the flower was the biggest I saw from him for many hours to come.

Just before lunchtime, Benjamin started to vomit. It surprised him. He hasn’t vomited in several days and this was so sudden. It was followed by another episode a little while later. Afterward he was exhausted. He fell asleep, and stayed asleep for four hours.

I cleaned, and sat on the edge of the bed, and watched Benjamin breathe, and cleaned, and watched him breathe again. I washed everything. My mind was racing and I was getting swallowed by sadness. It wasn’t serving anyone. I finally remembered to turn on some music. That always helps. (It also helps that Banyan knows exactly when to text me from school, just to check on his brother.)

When Benji woke up, he felt okay for a little while. He walked to the couch and got settled there. Then he vomited again. He agreed to take some Kytril, and he hasn’t vomited since. But after only an hour or so of wakefulness, he couldn’t keep his eyes open. He seemed so distant. I was drilling him with questions, mostly neurological. Vomiting and lethargy are symptoms of leukemia infiltrating the central nervous system. It’s such a fear of mine because of how prolific his leukemia is right now and how long it’s been since his last lumbar puncture. But he hasn’t had any other symptoms, no headaches, no blurred vision–and this came on so suddenly. Yesterday he was playing baseball and fishing for goodness’ sake. I hope I’m just being paranoid. Still, I emailed Dr. Oshrine. If Benjamin’s platelets are still rising or stable tomorrow (they were at 23,000 on Monday), I would like his opinion on scheduling a lumbar puncture. I understand there are risks involved with circulating blasts. But it’s worth the conversation.

Michael came home from work as Benjamin was drifting off again. The sound of the truck in the driveway was like a tonic. Benji stayed awake and gained energy as he spent time with his daddy. When Banyan came home from a friend’s house later in the evening, Benji perked up even more. He has been awake and happy for the rest of the night. He still feels nauseous, and he is in pain. But he kept half a sandwich down and has been drinking plenty. I feel more peace now than I have felt all day, with him feeling better and with all of us home together.

I don’t know if we will have results from NIH tomorrow, or if Benjamin will get treatment in some capacity. I don’t know what will happen. I do know that the moon will be full in the morning. Full moons are times for the intentions made on the new moon to be realized. On the new moon, bolstered by the prayers of so many family and friends, we set the clearest of intentions: Whatever the results of this aspirate may be, a clear path toward Benjamin’s perfect healing will follow. This remains my fervent hope. A path toward perfect healing.