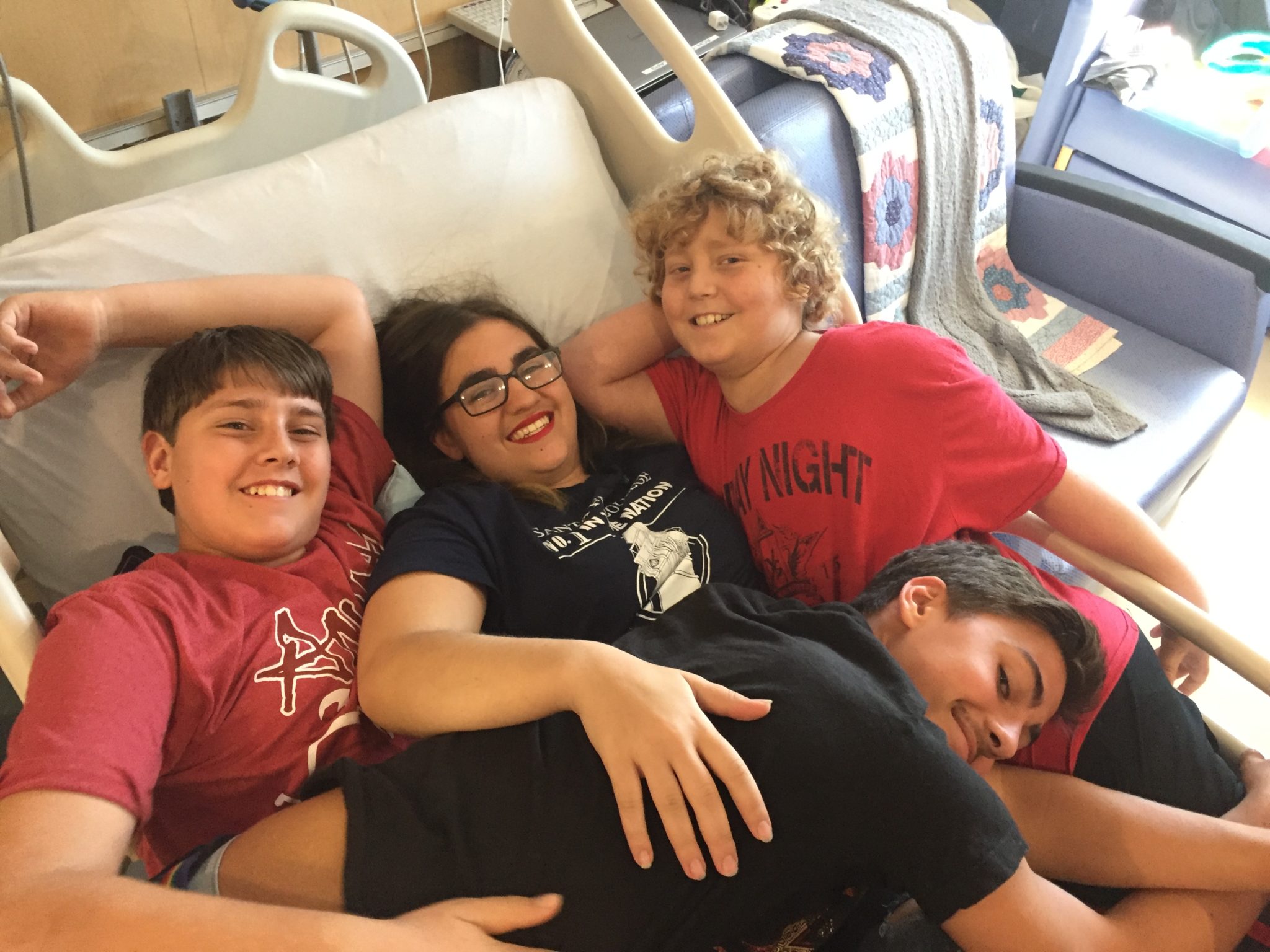 We didn’t get to go home today. We were richly blessed right here instead.

Benji’s absolute neutrophil count (ANC) dipped down to 140. His blast number went up a little, to 1.7%, but I wasn’t discouraged–his platelets actually increased. That speaks volumes to me. We’re still watching some high blood pressures, but I believe we’ll be at home in a day or two.

It’s Sunday, so Benjamin was deaccessed this morning and was unhooked all day long. Michael and Banyan came early and brought our now-traditional Sunday donuts. On our way to deliver a dozen to the nurses, we saw Dr. Oshrine, who was coming to chat with us. He was able to speak to Michael directly, which was great, and discuss our (hopefully) upcoming discharge and readmission for immunotherapy. He said that even if the percentage of leukemia that is still in Benjamin’s marrow is higher than expected, he can titrate the rate of the Blinatumomab, which would reduce the potential of cytokinesis. It feels like we are back on solid ground, plan-wise, which feels very reassuring.

We were joined in the afternoon by Kathy, Gana, Sarah, Lilye and Lotus. Our family rocks. It was wonderful to see them all. With so many people there to care for Benji and keep him happily entertained, Michael and I took a chance to leave together and get a breath of fresh air. It was hard to leave Benjamin. He had a moment of sadness as we left, and I did too. But I’m told he was laughing the whole time we were gone. I wanted to clean my car, which has been sitting in the parking garage for 36 days, and get it ready for a smooth, sanitary departure for Benjamin. I also wanted to pick up a nice meal for everyone. It was absolutely gorgeous outside. I’ve never enjoyed a gas station car wash so much.

The woman who brought out the food we ordered said the restaurant manager decided to give it to us on the house. It was such a generous gesture, and the second day in a row we’ve been fed by the kindness of strangers. So many people have done so much to take care of us. It’s overwhelming. I know I will spend the rest of my life trying to pay it forward.

Our party of nine ate in the conference room. It was absolutely delicious. When we returned to Benji’s room, it was time to put numbing cream on Benjamin’s chest, and start his countdown to reaccessing. He was nervous but handled it extremely well.

The hour went quickly, and when our nurse came in with her tools, our family graciously took a walk. Michael and I put on our masks and hats and helped Benjamin with his. He was breathing quickly and his eyes held tears, but he was so brave. He spoke up for himself and voiced his needs and concerns in a kind and clear way.

Our nurse skillfully found the perimeter of Benji’s port through his skin. I think that is his least favorite part, but now, since practicing on Chester the nursing dummy, he understands what they’re looking for. She punctured his skin. He felt no pain, so we were all optimistic, but there was no blood return.

Benji was so patient. Our nurse had another nurse assisting her, and she came to try and manipulate the needle without removing it and having to reaccess. She was successful. Benjamin’s bravery felt rewarded today.

Our family rejoined us for a little while longer before traveling to their respective homes. Michael and Banyan stayed until shift change, then said their goodbyes as well. Our night nurse is one we haven’t seen since last year. She works with the bone marrow transplant patients also. As we were chatting, I learned that Benjamin will also have a peripheral IV line open the entire time he is here for Blinatumomab. It’s because the medicine has to be constantly infused, with no breaks even for fluids or reaccessing. A second line is needed to facilitate this.

Benji had a great attitude about this new information. He has a great attitude about all of it, really. When he was falling asleep, we talked about going home, and about expectations. He asked if we’d be home by next weekend. I told him I definitely thought so, unless something happened that isn’t in the plan. “Like a fever?” he said. I nodded. He said, matter of factly, “If we go home, that’s great. If we have to stay, that’s okay with me. At least I don’t have to get accessed tomorrow!”

Life is what you make it. We are richly blessed indeed.