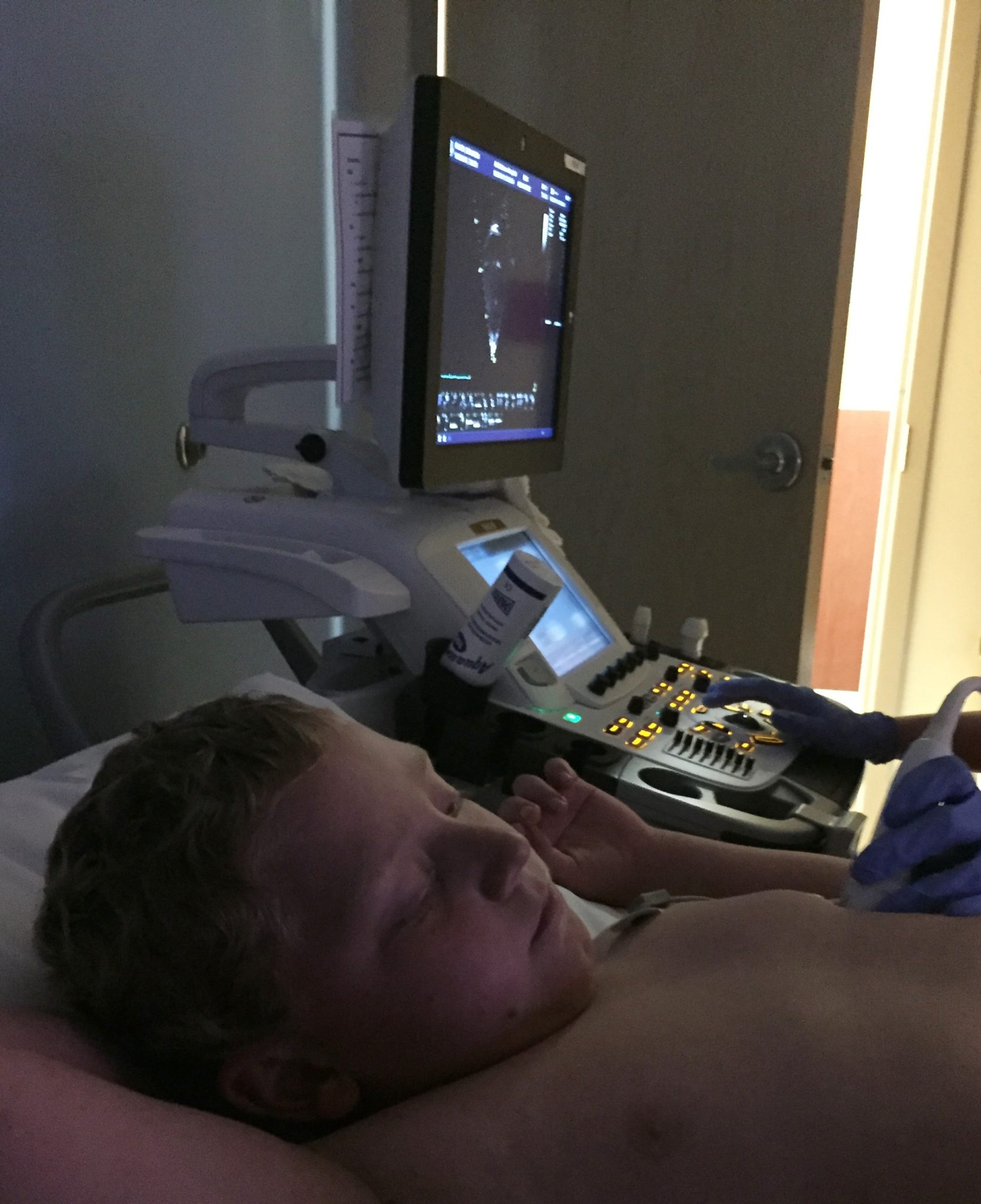 Benjamin had a follow-up visit with cardiology today. It was an appointment I scheduled months ago, as part of our arrangement to check his suspected patent ductus arteriosus (PDA) annually, and also as a matter of routine following the frontline months. Several of the chemotherapy medicines (doxorubicin most notoriously) can be cardiotoxic. It was time to see whether anything looked different than it did at the beginning of treatment.

After all of these trips over the Skyway, today I finally got smart and started listening to a Spanish instructional audiobook. I really should have done this months ago. I’d be at least trilingual by now. Benjamin and I had a thoroughly enjoyable drive, both of us knowing that no needles or blood draws or medicines were at the other end of the bridge for him today. He did his homework in the car, and I learned how to make reservations for two en Espanol.

The cardiologist we saw last year has since left the practice at All Children’s. We met a new doctor today. First, a technician took us into a dark room and clicked on Despicable Me 2.  During the part where Gru catches Margo texting with a boy, and Agnes says to Gru, “I know what makes you a boy! Your bald head!” Benji immediately corrected the cartoon characters. “No it doesn’t! Girls can be bald too, right mom?” Yep. Some of the most amazing girls I know.

The technician put stickers on Benjamin in preordained places and gooped him up with that gel he hates. She rubbed her wand around his chest and torso for several minutes; until the part where Gru decides to take the job with Lucy. Then we went back into the exam room. The new doctor, Dr. Herbert, came in, and I liked her immediately. She was young and confident introduced herself to me by her first name. I caught her up to speed on Benjamin’s treatment thus far, and told her that the previous cardiologist had suspected a PDA, but had never been able to definitively see it on the imagery. She had suggested a surgical procedure to close it, but recommended doing it after treatment, once the risk of infection was much lower. I also told Dr. Herbert that the Doxorubicin was behind us, and filled her in on Benjamin’s Methotrexate history, in case the toxicity had affected his heart in any way.

Dr. Herbert told us that Benjamin’s heart is functioning perfectly. The chemotherapy, doxorubicin, toxicity–none of it has negatively impacted his heart. Hallelujah. She said she cannot see or hear any evidence of a PDA, and without both of those diagnosing factors, best evidence recommends against intervention. This was music to my ears. She even said that barring the request of the oncology team for further heart testing, we didn’t need to see her annually.

We left the Outpatient Care Center practically skipping. I was so happy. I wasn’t expecting to feel this happy about a routine visit. Of course, if Benjamin had needed the procedure to correct the PDA, it would have been no big deal–it’s routine, and safe–but now we have one less intervention ahead of us. One less round of sleepy medicine. One less specialist to see. One less intrusion into his perfect body.

We picked up a delicious lunch and came home with just enough time to do a grocery run before picking up Banyan. Banyan had a huge smile on his face as he approached the car. His academic turnaround has been beyond refreshing. We knocked out the rest of homework then went down south to share a lovely meal with Michael’s grandparents, aunt, mother and sister. It’s been way too long.

On the way home, I promised the boys a trip to the bookstore for new nighttime reading material. In the parking lot, we happened to witness a young couple getting engaged. They embraced, then walked into the cafe inside the bookstore. The boys and I headed for the books. The couple has no idea that they were spotted, nor that one of their witnesses–me–wrote her marriage vows in that same cafe, alongside the man she is now married to, almost fourteen years later.